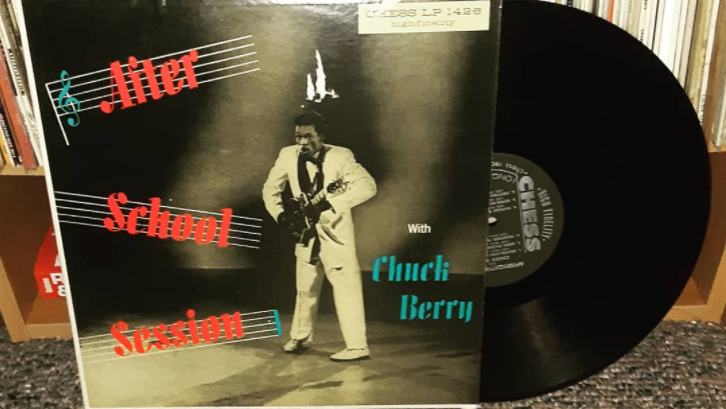 After School Session compiles material from the first singles released by Berry on Chess Records between 1955 and 1957, plus the “unreleased” instrumentals Roly Poly and Berri Peckin´. In hindsight, Chuck Berry has always been recognized as one of the pioneers of rock and roll with his unmistakable sound that would mark his ultimate peak with the indelible Johnny B. Goode.

However, when listening to these songs from the first period consecutively, a bluesy Berry is denoted with an interest in the instrumentalization of his creations, over the speed and danceable sound.

This album is a mixed mix of nice rock n’ rollers (“Too Much Monkey Business”, “Brown-Eyed Handsome Man”) and slow blues pieces (“Deep Feeling”, “Wee Hours”). A lot of nice stuff, but also some things that don’t knock us off our feet. We find the Latin influences in various pieces interesting (“Berry Pickin ‘”, “Havana Moon”). My favorite piece is the strangely dark, surreal “Down Bound Train”.

Of course, the two streaks that have made him a legend, his funny lyrics, and the quality of his Gibson appear more than present in these first recordings.

A debut that turned out to be like Chuck Berry albums became the most; rock-rock strongly inspired by classic blues and with some fun twists here and there, but unfortunately not enough to make it really good, overall.

Perhaps unique but, this LP does not have his first single Maybellene, a great absentee and one of the favorites, the one that would begin the story of one of the pioneers of the music that feeds us.