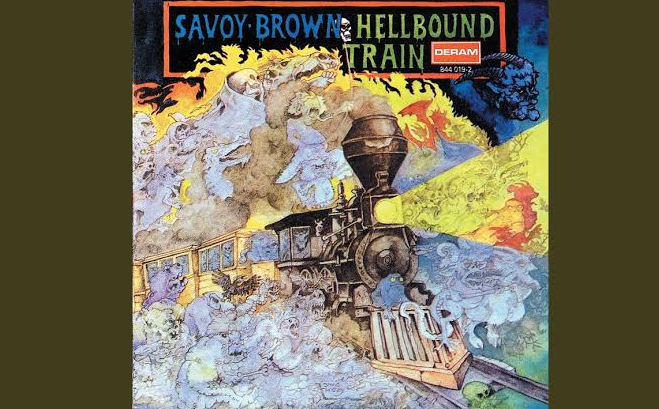 Savoy Brown focused more on instruments apart from using, guitar — they delved in with harmonica and some keyboards plus some vocal touch. Younger, Stevens, Earl and Lonesome Dave had been replaced by Dave Bidwell on bass, Paul Raymond on keyboards plus rhythm guitar, Dave Walker, on vocals. and Andy Pyle on sticks.

“Hellbound Train,” without it being a bad album, there’s nothing really to it — from the first track “Doin´Fine” to the last “Hellbound Train,” it all sounds exactly the same. It seems the group, staying too long in the US, rather than in their native England, spending time with their producers Neil Slaven and Gruggy Woof, and their success caused them to leave behind the more jazzy adventures and experimentations, hence “Hellbound Train.”

Overall, the album has a great start and end, but very bland development. But hats off to them, as they really know how to make an album cover, and that’s probably the highlight of this album. Nevertheless, the title track is enjoyable enough, and it’s everyone’s favorite track, and probably the best Savoy track ever. ‘Hellbound Train’ is the reason for buying and listening to this album.