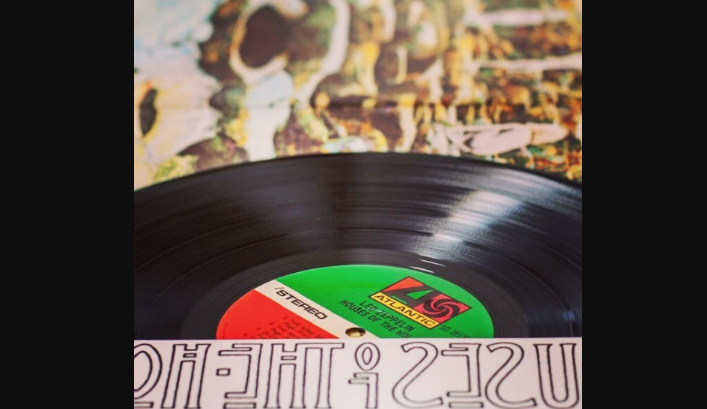 After the stunning success of the album “Led Zeppelin IV”, the group decided to relax a bit and give us the album “Houses of the Holy” in 1973, and the album cover makes us shiver in the voluptuous cramps of any pervert. The spirit of this strange artistic composition is inspired by the ending of Arthur Clark’s novel “The End of Childhood,” which is completely inconsistent with the contents of the record.

Due to cover art, the album was banned in some particular spiritual states in the United States.

The album opens with “The Song Remains the Same,” which greets us with lively guitar riffs that migrated straight from “Stairway to Heaven.” The song sounds pretty heavy and acidic, especially if you listen to the hippy lyrics.

Then begins “The Rain Song” – quite a rainy song, and here the content is fully consistent with the name, and vice versa. A definite plus is pleasant pseudo-string overflows; Led Zeppelin it was high time to diversify their tools.

“Over the Hills and Far Away,” Led Zeppelin returned to their old, boring, and moldy sound, categorically refusing to leave their bland rustic style.

The fifth composition is “Dancing Days” and once again we hear the bored-out elements of Baptist chants wandering from album to album. On the other hand, paradoxically, this composition is much closer to Metal than others.

From the first chords of “D’yer Mak’er” a picturesque image of a cheerful mare appears, joyfully waving in all directions with a poured and resilient udder. This song is well-known to many.

With a short space intro, the seventh song “No Quarter” goes into blues-rock, which is an attention catcher! The drum part migrated here from the last song of the previous album. You expect to hear another musical heresy, but closer to the middle you realize that this is a really good song.

The last song is “The Ocean”. This is an unremarkable standard and template song with ingenious rhymes such as “sunshine – moonshine” and “rain – brain.” Again epileptic monotony, again hypertrophied guitars, again meager tools. Listening to this, you can easily understand that there is nothing wrong with the fact that the era of Led Zeppelin has sunk into oblivion.

The album “Houses of the Holy” marked the return of Led Zeppelin to their traditional rural collective farm sound. After the phenomenal success of the previous album.

Keep going and listen to the full album below: