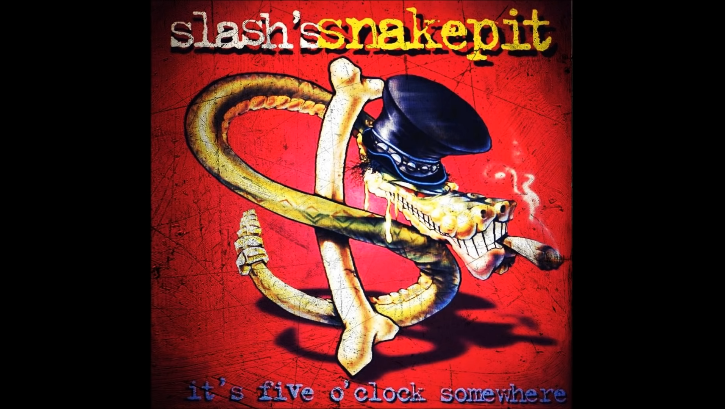 When Slash released It’s Five O’Clock Somewhere as Slash’s Snakepit it was the time when his relationship with his band Guns N’ Roses was turning upside down.

In his 2007 autobiography Slash, he recalled that Guns N’ Roses started feeling like he doesn’t belong with them anymore, especially with Axl Rose exerting as the band’s leader. Axl was a dictator leader of the band — he even sacked guitarist Gilby Clarke without consulting the others and forced them to accept guitarist Paul Huge as Gilby’s replacement.

“I was open to the idea … until Paul showed up,” Slash said in the book. “He had no personality whatsoever, and no particular guitar style or sound that I could identify with.”

“I was writing for the hell of it, just doing music indicative of where I was at the moment,” he says in the book. “I hadn’t grasped the idea of doing a Guns record or what that might be going forward. I was just having a good time with no pressure whatsoever.”

“At the start of it, it was a step-by-step thing,” Slash said in a 1995 interview with Ireland’s RTE. “At first, it was just a bunch of us hanging out, really enjoying each other’s company, and then it turned into jamming and coming up with new riffs and stuff. At first, it was just [drummer] Matt [Sorum] and myself and after that, Gilby got involved and [Alice in Chains bassist] Mike Inez mysteriously showed up at a party I was having, [and he] brought this whole new vibe to it and it seemed like a band. It was guys jamming together, bonding just through the playing and personalities without the rock-star shit. It was just enjoying playing together.”

After all the melodrama in Guns N’ Roses, Slash found himself again reawakening his interest in music with Snakepit, after releasing their debut album.

“We had a lot of fun, there was no drama,” the guitarist says in Slash. “We just booked gigs, showed up, got up there and played. We did clubs and theaters, and it was great. It really helped me discover why I love what I do. That project was the essential soul-searching that I needed, because I felt like I’d forgotten myself over the last two years. It was a shot in the arm for me to rediscover what it is I always knew: Being in a band doesn’t have to be so taxing emotionally and psychologically. … It can just be all about the playing.”