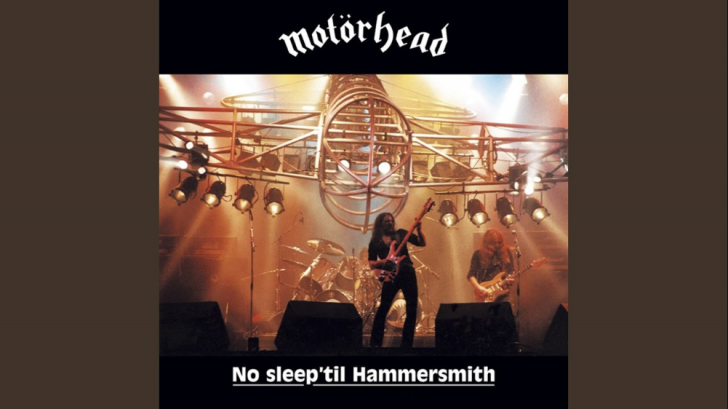 The NWOBHM was a grand genre in the UK in the early ’80s. A large number of groups emerged but few (Iron Maiden, Saxon, etc.) managed to export this promising style.

Without being able to associate it with the movement, Motörhead was obviously part of it and made it heard (literally as well as figuratively). As proof, this live album recorded in June 1981 at the legendary Hammersmith Odeon in London.

One of the best Lives ever published, all styles combined, was recorded on Ozzy Osbourne’s Blizzard Of Oz tour, on which Motörhead was a “special guest”. As soon as it was released, it entered the top spot on the English charts and remains the only Live album to have achieved it!

At the controls of this real rock bulldozer, oiled and honed to perfection, three brigands dressed in cartridge belts who tirelessly assemble eleven acts of rare power, the best of the three previous masterpieces (plus two titles from Motörhead… ) on amphetamines (we come back to it…)!

Question lights, decor, decibels and amplification, everything was there for the audience to end up on the kneecaps in front of baffles loaded with incendiary riffs.

Motörhead was then at the height of its glory and no group could compete: it was the icon of a whole generation, it would henceforth be a myth. And the myth can boast of having published as many albums today as mammoths like Black Sabbath or Deep Purple … And it’s not over! Unavoidable.

Don’t believe me? Listen to the full live album below: