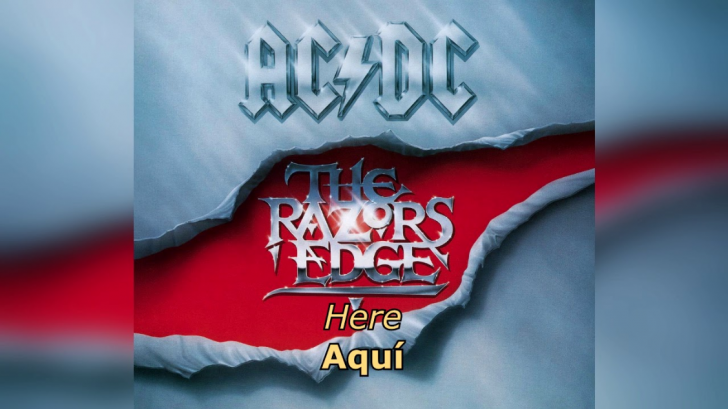 One of AC/DC’s most consistent album that features 12 songs with a very few fillers in it. After having a hard time during the 80s’ with the death of Bon Scott, unimpressive releases, and internal issues, the band picked up again in 1990, where they decided to regain themselves by releasing one of the best albums the decade can offer.

It was overall quality, with such enjoyable songs. Thunderstruck, being the best-known intro in the history of rock, and with Cliff’s bassline and Brian’s interesting voice, they made the song reached the top. Fire Your Guns, though slightly weaker than Thunderstruck, it still beats what they did during the 80s’.

You can listen to the full album below.

Money Talks has the intro that is so irresistible and develops into such tasteful riffs. Then Cliff basslines and Brians vocals joined together to make one solid track, so simple and yet catchy, especially the chorus.

The self-titled track, The Razor Edge, is definitely the weakest track from this album – it’s a song that delivers an uninteresting filler song – so you can just skip it.

Mistress For Christmas, there’s nothing really special to it, but the chorus though boasts an enjoyable listen.

Rock Your Heart Out, Cliff once again showcased that he’s a formidable bassist for the band, with its jumpy bassline, make it an interesting track, it’s an enjoyable track but Brian was a bit out-of-tune on this one.

Are You Ready, this is the track where the album picks up its quality back again as the title suggests – probably the third best track on the album. It delivers a sound that every hard rock fans would enjoy.

Got You By The Balls, when AC/DC writes songs about balls, they make sure that it is an unforgettable one – especially with Angus’s great solo, which makes the track as one of their lost gems.

Shot Of Love, nothing spectacular about the track but it’s indeed a fun AC/DC song, it has good riffs, enjoyable chorus, and somewhat tasteful solo by Angus.

Let’s Make It, a track where the Young brothers manage to showcase their songwriting skills because the structure of the song really works — it’s indeed another AC/DC lost gems.

Goodbye and Good Riddance to Bad, a song that is too generic for its taste – though they manage to pull it off, it just doesn’t stand out and doesn’t fit well on the album. It’s not great, but not that bad.

If You Dare is a nice way to end the album – it’s a strong track, so there’s that, nothing special to it, but a good track indeed.

All in all, the album starts strong, weak in the middle, then regains its momentum again – a-must-listen album for die-hard classic rock fans.