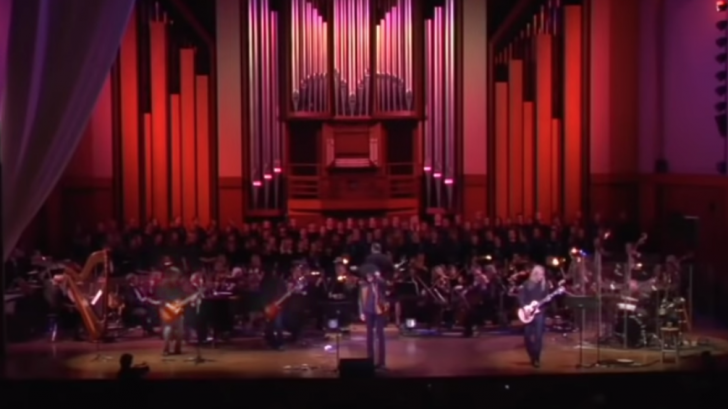 There are some songs no one should cover- ever. It is an undeclared presumption that Led Zeppelin’s “Kashmir” is one of those songs. It’s been done, the song is complete and perfect just as it is. Yet, someone did attempt to cover it, and they succeeded. Grunge capital natives, Alice in Chains, joined the Northwest Symphony for an intense rendition of “Kashmir.” The band joined forces in their hometown of Seattle, Washington, to benefit Seattle Children’s Hospital and Regional Medical Center.

What transpired was an otherworldly trifecta of mythical emotion omitted through an orchestra of sound. You can feel the sound in your chest as soon as the conductor starts up the string and percussion sections. Then you  hear the entire audience lose their gosh darn MINDS. That’s when you know it’s about to go down…

Even The Conductor Can’t Help Feeling The Energy

With new front man, William DuVall, Alice in Chains delivers the most epic Led Zeppelin cover ever. His vocals might not be Robert Plant range, but he can get pretty high up there. His voice reverberates against trumpets, guitars, major percussion, and … an entire orchestra. It’s not an easy feat for any musician. Bassist Mike Inez and drummer Sean Kinney have to be careful to not speed up the tempo. Their positions in “Kashmir” are crucial but prolific because of their poignant and well-timed instrumentation. Jerry Cantrell is always a star and brings together Alice In Chains in an iconic way.

The Northwest Symphony provide a hard-hitting accompaniment to the Led Zeppelin cover. With their conductor jamming away you can tell they’re all having a good time. The performance itself would be hard to accurately describe- as nothing compares to being there, especially when an entire orchestra is involved.