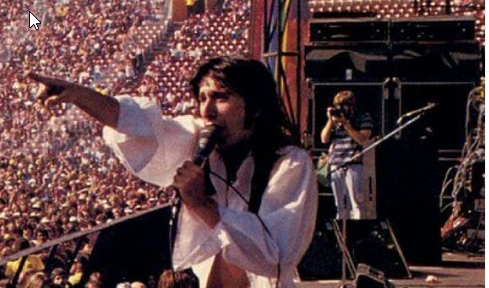 Hopes Of A Reunion

Remember when the time Journey’s Neal Schon and former singer Steve Perry reconnected at the band’s 2017 Rock And Roll Hall Of Fame induction? This event explored the interest of a Journey reunion with Steve Perry. Neal expressed his interest in the possibility of working with Steve Perry together again, but the guitarist, of course, was just hoping that it could possibly happen.

Schon and Journey kicked off the “Through Time” tour and spoke with AZ Central about the details of his March 1st concert in Phoenix.

During the interview, they dived into the subject of Steve Perry returning and Neal responded:

“I’m gonna not say anything more about it. I’ve gone way out on a limb in so many different ways and all I can tell you is that he’s not contacted me to have that coffee yet. So I’m just gonna give it a rest.”

Steve Perry is also doing well by himself, he managed to release his new album “Traces” late last year and Neal had something to say about the album:

“Did I listen to his record? “Yeah, I listened to his record. And I hear a lot of emotion in it. I understood where the record was coming from and I thought he sounded very good.”

“I said, ‘Well, if we ever got together, I definitely know where I’d go with him, in more of a blues and R&B thing.’ But I’m just gonna leave it alone because it just seems like he wants to have his own time to do things and not have a bunch of people talking to him about ‘Are you gonna get together with Neal? Are you gonna do JOURNEY?’ And all those answers are always, ‘No. No. No. No.’ But then every once in a while, he says something that gives you the feeling that he’s open to it. But after a while, you just have to leave things alone and let them take their own course.”

Is there any hope that Steve Perry would one day consider a reunion with Journey? Or should we put that hope back on the burner?