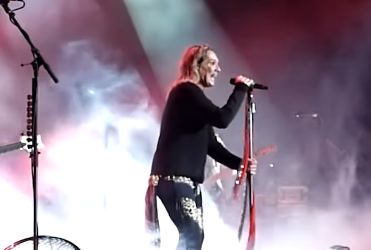 If you saw Steel Panther during their “Sunset Strip Live!” tour, you’ve already joined them in celebrating the evolution of heavy metal as they performed some of the genre’s most recognizable covers along with some of their best original songs. Fans laugh out loud every night when Michael Starr impersonates Ozzy Osbourne while singing “Crazy Train,” though.

Michael Starr portrays Ozzy Osbourne in a black T-shirt with long sleeves, copying all the tricks, including clapping his hands, appearing lost, and saying catchphrases like “we love you” and “let me see your hands.”

Michael Starr has long demonstrated his ability to perform a flawless David Lee Roth, but his Ozzy voice is equally unnerving. Starr even makes a habit of occasionally stumbling over or forgetting the words as he yells out the verses to “Crazy Train.”

Check out the video below to see how well Starr has nailed the rallying cries, stage movements, and endearingly goofy smile of the former frontman of Black Sabbath, right down to the Ozzy-inspired eyeliner and long-sleeve black shirt.