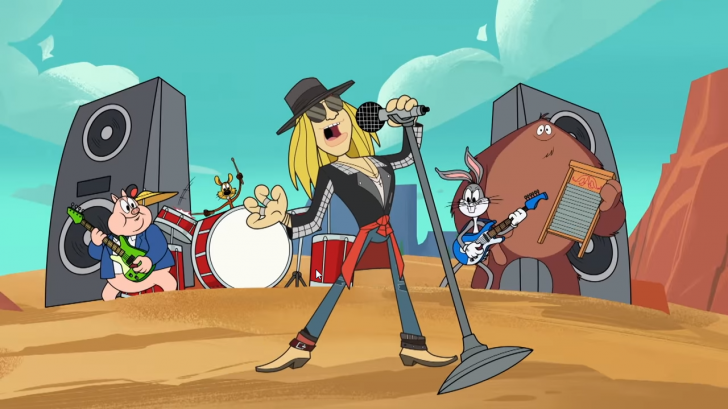 We Do Hope It Is!

During the “Not In This Lifetime…” tour, GNR often played the Looney Tunes theme song to open their show, and now it appears that their most favorite cartoon has come to a new approach. Of course, nothing’s been confirmed yet, but the clip (available below) features what is believed to be Axl Rose’s voice, and not just that – it also represents exactly how Axl Rose sings in the episode of New Looney Tunes. This has left curiosity among rock fans if he just debuted a new song titled “Rock the Rock.”

If this is the case, then the song may be their first new music since the 2008 release of Chinese Democracy. In the episode, Rose’s tour bus crashed into a giant pig, and he then asked Bugs Bunny the directions for the Civic Center because his band, Steel Underpants, will be doing a show that night.

The clip just showcased what is to sound like Rose’s voice, both his high and low ranges and then it approaches into something we’re familiar of – his voice in AC/DC when he replaced Brian Johnson during their tour. One thing is not clear though if the song is a new GNR, a future solo album, or an AC/DC song.

It’s been a long time since Axl and GNR released a new song, so if this is true indeed, then it’s a good one far from what we’ve heard in Chinese Democracy.

Keep going for the clip below and enjoy: