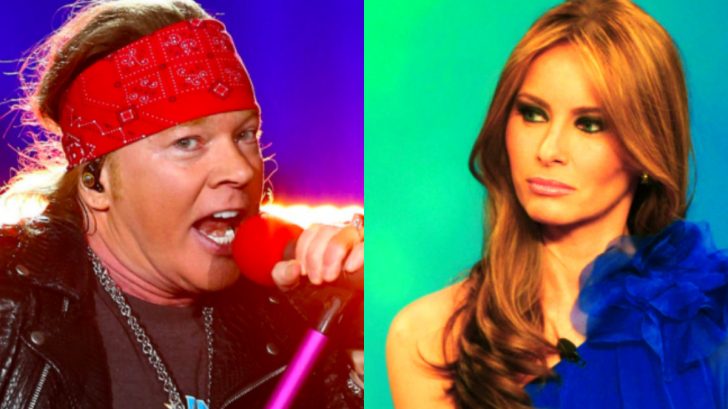 Axl Rose is not known to be nicest celebrity, not even on social media. So when he went on a tweeting spree “attacking” Melania Trump, it did not come as a surprise. Not especially so, during the current political climate.

Rose’s tweets stemmed from news outlets everywhere recently reporting that Melania Trump (neé Knauss) obtained an EB-1 visa from her native Slovenia in 2001. The EB-1 visa is also known as an “Einstein Visa”, awarded very rarely to individuals who “demonstrate extraordinary ability in the sciences, arts, education, business, or athletics through sustained national or international acclaim.” Applicants can also “demonstrate international recognition for outstanding achievements in a particular academic field.”

The controversy with the visa comes from reports that Melania dropped out of college during her freshman year before becoming a model, thus, making many people, including Rose, question how she was awarded an Einstein Visa. Further research leads to questioning Trump’s involvement in Melania’s successful EB-1 visa application, since Melania met Donald Trump in 1998, famously being photographed nude on Trump’s private jet for a 2000 issue of British GQ. This special EB-1 visa also paved the way for Melania’s parents to move to the U.S. via “chain migration,” a practice which President Trump now aims to end.

Axl Rose went savage on Mrs. Trump on March 1st in a series of tweets:

"Mrs. Trump was more than amply qualified and solidly eligible," Michael Wildes, an attorney for Melania Trump and her family said to the Post. "There is no reason to adjudicate her petition publicly when her privacy is so important to her." No one else has any!

Some alleged former hooker who got in on some "trumped up" immigration con somehow deserves privacy cuz it "means so much to her?" Fuck this clown!!??

Where's that ICE Nazi Homan when u need him?!

This is in reference to Thomas Homan, the acting director of Immigration and Customs Enforcement.