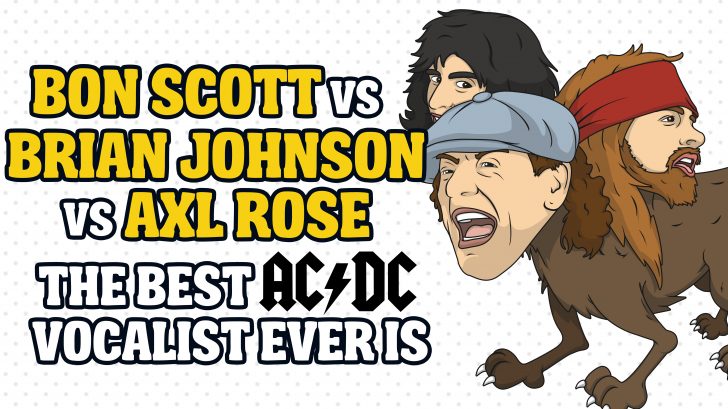 AC/DC has one of the most colorful and rich backgrounds in rock n’ roll history. If you think about it, we’ve experienced three vocal generations with this band. From Bon Scott to Brian Johnson and now with Axl Rose of Guns N’ Roses. But everyone has their own opinion about them. In this piece, we dive right into the three legendary singers that helmed the one and only AC/DC and might find out which one is the best if you seek that answer.

We’ve gathered footages of the three singers going at it with Highway To Hell below and you can see the difference in style, execution, and greatness.

On 16th of April 2016, AC/DC announced the addition of Guns N’ Roses lead singer Axl Rose will take over the position of vocalist for the band. People were surprised or arguably confused at some level when they heard the news. But I was stoked. It’s unfortunate that Brian Johnson needed to step back because of his hearing problems but the show must go on. Axl Rose is spot on in this performance with the song but we can evidently see the difference. We get a dose of those clear high tones but missing some of that grit in the voice. Axl has a pretty clear and good control over his voice. Seemed like there ain’t no other better replacement for Brian than him. Though I might say I miss that gritty in your face attack to the singing.

The Brian Johnson’s era ran from 1980 to 2016. Even though he was the second vocalist to fill in the spot, he was the longest. Brian brought something timeless and sustained AC/DC’s career for 36 years. After Bon’s death, those are some pretty big shoes to fill. But Brian proved himself as a worthy replacement as the band continued to move on with progress up to the time where his hearing was affected too much in 2016 that he has to end touring and ultimately playing in the band. Brian’s voice definitely is different from Bon’s. It has more grit to it but at the same time somewhat similar to Bon’s as well. Might do with the fact that both singers idolized Little Richard. Must have been a hell of an influence on them.  Altogether Brian is arguably one of the best vocalists in Rock n’ Roll history that not just offered a unique voice to AC/DC but was the main factors that pushed them further to the top!

Salute to one of the most iconic voices in Rock n’ Roll history and a big foundation of AC/DC. Everyone that ever lived and catch his era was lucky. Bon’s voice and character was the main factor that really gave AC/DC its signature sound and that was what propelled them to rock n’ roll domination. We can say Malcolm and Angus made the right decision to replace their first vocalist before Bon. Bon’s era ran for 6 years and achieved megalithic success before his untimely death.

We can all say that the other will always be better but we can definitely be thankful that these guys kept rock n’ roll alive by not letting one of our favorite bands not achieve what they have achieved and can still achieve as AC/DC.