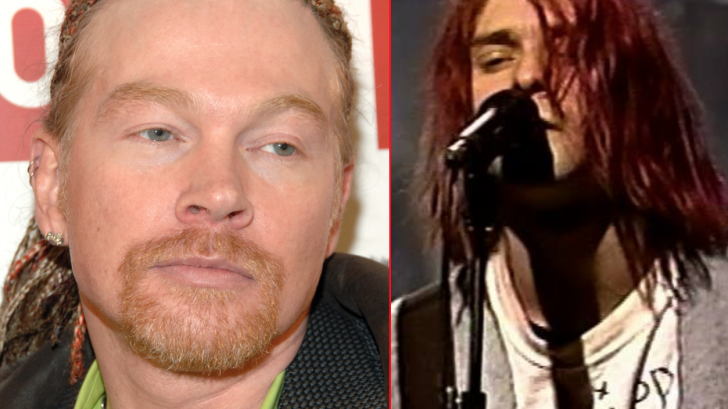 Long before we met this newer, kinder Axl Rose that seems to be inherently at peace with who he is and more importantly who he was, Axl was far from likeable. Late Nirvana frontman Kurt Cobain learned this the hard way after turning down Rose’s offer to play at his birthday party and later, to join Guns N’ Roses on tour with Metallica, earning Axl’s wrath and prompting the Guns N’ Roses frontman to refer to Cobain and his wife Courtney Love “a junkie with a junkie wife.”

Rose even so far as to say, “If the baby [Love and Cobain’s newborn daughter Frances Bean] is born deformed, I think they both ought to go to prison.”

The showdown reached a fever pitch at the MTV Video Music Awards when Courtney Love taunted Axl with “Axl, Axl, do you wanna be the godfather to our child?” after running into him before the show began, prompting a violent response from Axl who told Cobain to “shut Love up” or he would “take him down to the pavement”.

Security intervened before any blows were thrown, but the night wasn’t over; Nirvana’s performance that night ended in an explosive fashion as the band destroyed their instruments onstage on live television, with drummer Dave Grohl running down from his kit to scream into a microphone, “Axl! Axl! Where are you Axl,” making fun of the night’s events.

Kurt and Axl never buried the hatchet as Kurt died two years later, but judging by the fact that Dave graciously loaned Axl his throne for the start of Guns N’ Roses’ Not In This Lifetime… Tour in 2016, it’s safe to say that all is forgiven.