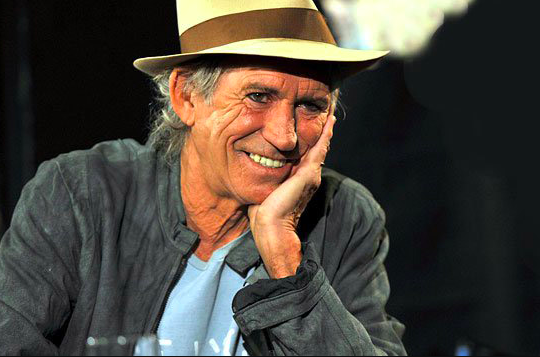 A new album is on the horizon!

And legendary guitarist Keith Richards is not just teasing, but promising that the record will be “very interesting”.

Over the last two years, The Rolling Stones have been spending some time in the recording studio, cooking up something to follow-up their 2016 LP ‘Blue & Lonesome’, a record of blues covers.

The 74-year old rock hero discusses the progress of the band’s song writing process for the new album, saying,

“We have some stuff down, which is very interesting. It’s more difficult for us to write together the further apart we are, but it also has its benefits in that we come back to it from a different angle.”

Richards has been writing with frontman Mick Jagger, his writing partner for over 50 years, and he says that’s always a challenge. He shared to Wall Street Journal magazine,

“Mick and I live off this fire between us…I find it an interesting challenge to write for [him]. There’s no point in my giving him a song that’s beyond his range or that he’s not comfortable with. What I really like to do is write a song where Mick goes, ‘Yeah, right, I’m in!’

“That’s what I try and do, because I’m writing for the lead singer of the Rolling f***ing Stones, and that is my job — to give him a riff that he leaps on and goes, ‘Right, I know what to do with this.’ “

When does this new album come out?  Richards says it might still be a while, but he does promise good things, saying

“I’m going to sound like Trump — ‘It will happen; don’t worry about it’ — but it’s in the early stages.”