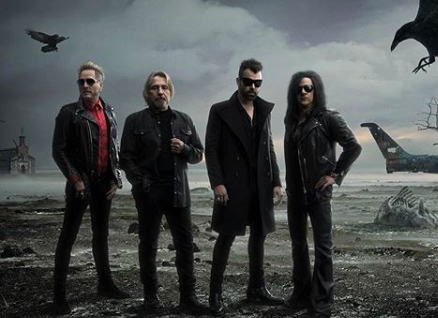 Just when you think it’s over…

Early in 2017, Black Sabbath bid farewell to their fans and played their final show, announcing retirement. But For Black Sabbath bassist Geezer Butler, it ain’t over yet as he’s formed a new supergroup with Guns N’ Roses drummer Matt Sorum, Billy Idol’s guitarist Steve Stevens, and Apocalyptica singer Franky Perez called The Deadland Ritual. This new exciting rock powerhouse supergroup is also coming up with brand new songs and has actually already released the music video for their new single called “Down in Flames”.

All of the members of Deadland Ritual come from different genres of rock. Geezer Butler, ofcourse, comes from the pioneers of heavy metal, Franky Perez is from alt+rock, Matt Sorum has a grundge rock background and Steve Stevens is hard-rock-glam-metal. So with all of these diverse backgrounds, what sound and style does the Deadland Ritual offer? That’s the beauty of their diversity in rock music as they come out with a unique style of hard rock with dark overtones and a soulful delivery. These characteristics can definitely be heard in their new music. Butler says of this new project,

“I was working on a new solo album when this came to light. It was appealing for me to work in a band environment because that’s what I’m used to, so [it] feels really natural. I’m really looking forward to playing shows with these guys.”

Sorum recalls how the lineup came to be and tells,

“Steve and Franky were the first guys I called. We knew we wanted to create a heavier rock sound, but when I contacted Geezer and he agreed to play I knew this could be a great band. Not long after we connected with producer Greg Fidelman, Deadland Ritual was born.”

The band already has two festival apperances on their summer 2019 schedule (Download and Hellfest on June 14 and June 22, respectively). And they promise that their live set list, will include a deep dive into each members’ catalog but “not the typical songs you would expect”, as teased by Sorum.

Watch their newest music video below: