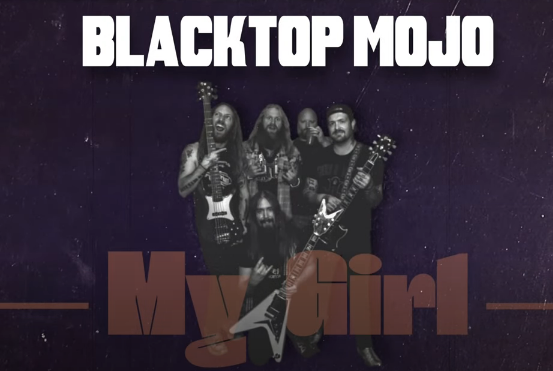 The band Blacktop Mojo, created by Matt James, vocals, and Nathan Gillis, drums, in 2012, in Palestine, Texas, and supported by guitarists Ryan Kiefer and Chuck Wepfer and bassist Matt Curtis, since then there have been four studio albums.

Blacktop Mojo has influences from bands like Led Zeppelin, Alice In Chains, Tool, The Black Crowes, Pearl Jam, Black Stone Cherry, and Soundgarden and on those albums, you can undeniably hear it. The group released their self-titled fourth album on August 13 (2021). The album was produced and recorded by Phil Mosley in Nashville, Tennessee.

Singer Matt James says, “We all know this song. It’s a song that comes on the radio or starts playing in the background as you’re in the grocery store and immediately you begin to hum along and have visions of the new girl you’re falling head over heels for, and you feel all the warm fuzzy feelings she gives you, welling up inside. Our version of the song is when you fast forward into that relationship with the same girl that gave you all that warmth and sunshine, but she’s up and left you and taken the ‘Month of May’ with her.”

The metal group added: “We love the original tune. Everyone grew up listening to it. There’s definitely something special about Motown and that era of music and there’s a reason why artists like the Temptations have stood the test of time. However when you’re having a bad day, or maybe having it out with your lady, and a song like ‘My Girl’ comes on, while nine times out of ten it’ll cheer you up, sometimes you just don’t want to hear a happy love song. Sometimes you’re in the ‘Lonely Hearts Club’ instead, and that’s where our version comes in.”