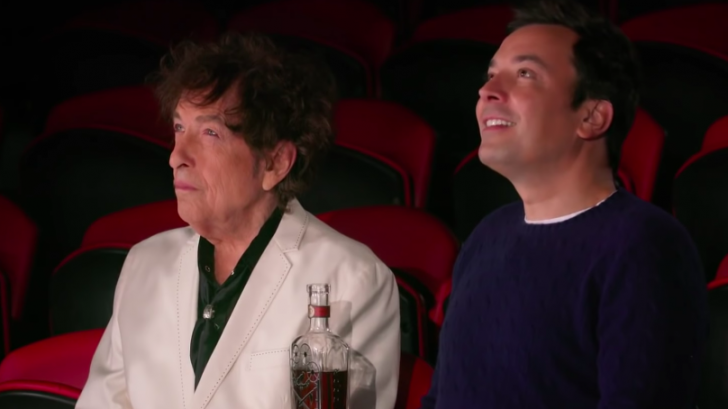 Bob Dylan stopped by The Tonight Show Starring Jimmy Fallon for a special funny Thanksgiving appearance. The nobel prize winning singer-songwriter pre-taped a skit that came at the end of the episode right after surprise guest Jerry Seinfeld wowed the crowd by doing Fallon’s opening monologue.

In the skit Fallon did with Dylan, Fallon tells his audience that he and a guest had been invited to watch a private performance of the Big Apple Circus. The video had no dialogue nor any introduction as Fallon was shown sitting mezmerized in an empty theater while Dylan walks in, unabashed and unamused, with only a bottle of Heaven’s Door whiskey between them as the Big Apple Circus twirl in mid-air.

In the sketch, Dylan poured a glass of his Heaven’s Door whiskey, which he and Fallon enjoyed as trapeze artists and acrobats perform for them.

At the end of the circus performance, Fallon stands up to applaud the circus performers but, as he looks beside him towards Dylan, the musician has disappeared and Fallon realizes he was never really there, leaving behind only his whiskey glass.

Heaven’s Door Spirits is a collection of handcrafted American whiskeys of which Dylan is a partner with. Marc Bushala, one of Dylan’s partners in the venture, told The New York Times that $35 million was raised from investors to launch the whiskey brand.

It’s been known that Dylan hates interviews and doesn’t like speaking to the media much. So, he let his silence and his whiskey do all the promo for him as he allowed Fallon’s funny sketches promote his brand of booze. The comedy skit they did could actually easily pass as an art film, with Dylan’s silent brooding going well with Fallon’s funny fawning.

We wondered the same thing as Fallon when he said, “What was in that whiskey?”

Watch the skit below: