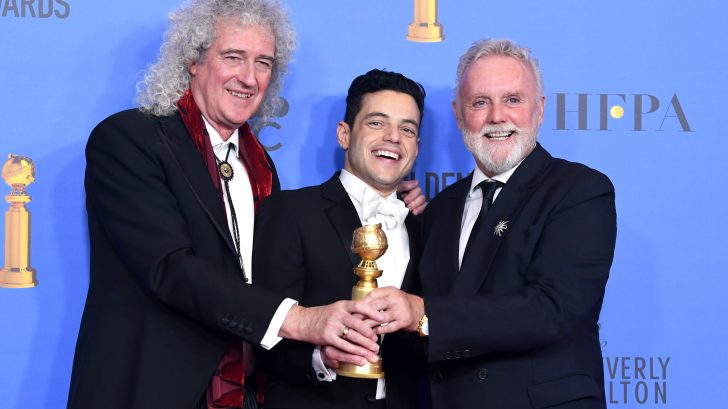 It may have taken a long time for the Queen biopic to be completed with several problemss as to the main actor and director in between, but in the end, everything was well worth it. On Sunday night, the film took home two awards – Best Drama (therefore beating “A Star is Born”) and Best Performance by an Actor in a Motion Picture, Drama for Rami Malek (besting Bradley Cooper).

It was also noted that Rami Malek didn’t thank or even mention director Bryan Singer who was accused of sexual assault and was fired before the filming was even finished. There were also rumors that Singer clashed with Malek on set.

“I am beyond moved right now. My heart is pounding out of my chest right now… Thank you to Freddie Mercury for giving me the joy of a lifetime. I love you, you beautiful man. This is for and because of you, gorgeous.” – Rami Malek

The development of this blockbuster wasn’t a walk in the park. They initially cast Sacha Baron Cohen to play the role of Freddie Mercury before he ended up dropping out.

Although it was a worldwide success, critics had mostly mixed reviews about “Bohemian Rhapsody.” It has been criticized several times especially with how they didn’t incorporate much about Freddie’s AIDS diagnosis into the story.

But after this Golden Globes win, they might just get a nod from the Oscars.

“To you, Brian May, to you, Roger Taylor, for ensuring that authenticity remains in the world.” – Rami Malek

This made us want to look forward to the Oscars. No matter what other people may say, Rami Malek absolutely deserved the award. Not only did he work hard to portray the iconic Queen frontman but everything from the grand gestures to small mannerisms was totally spot on!