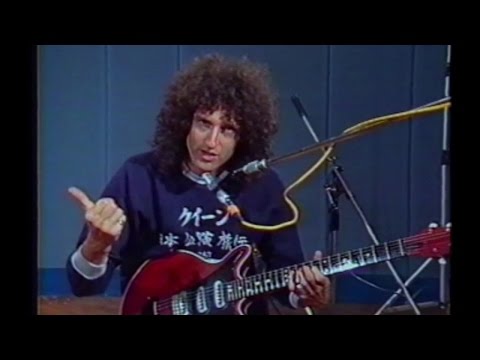 According to the British magazine Total Guitar, Brian May, the guitarist of Queen, is the best guitarist of all time, surpassing even one of his idols, Jimi Hendrix.

A wonderful collaboration with Brian May seems to have gone unnoticed: the Star Fleet project (1983). This invention was born from the obsession of Jimmy May, the son of Queen’s guitarist, with a galactic-inspired Japanese television series. May took the original track (“Star Fleet”) and turned it into AOR for family enjoyment.

To record it, he called in Eddie Van Halen and a few other friends: Phil Chen (Jeff Beck), Alan Gratzer (REO Speedwagon), Fred Mandel (Queen), and Roger Taylor, who did some vocals. Stuck in flour, they recorded another original May song (“Let Me Out”) and a long instrumental blues improvisation dedicated to Eric Clapton (“Blues Breaker”).

Of these, the fan-favorite is the song Star Fleet, which begins with a tapping by Eddie Van Halen. It’s a beautiful composition with a sound reminiscent of Queen’s hard rock songs from the ’80s, sung with success by Brian May and featuring luxurious backing vocals by Roger Taylor. The plucks and guitar solos are perfect for the melody of the theme, likewise the keyboards of Fred Mandel complement it well. This theme is actually a rock arrangement of the original theme Star Fleet, from the Japanese series of the same name.

Watch Brian May in the video below as he teaches how to play the song: