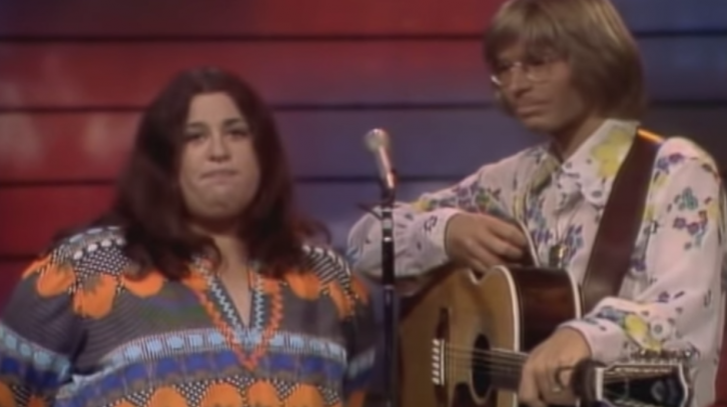 The Midnight Special is a staple of American television. The NBC broadcasted show would invite (usually) rock and roll musicians to perform- live. The program was 90 minutes long and aired on Friday nights. The series premiered on August 19, 1972 to lots of happy music fans.

The pilot debuted with guest stars Cass Elliot of the psychedelic Mamas and Papas and John Denver, a rock/ country crossover mega artist. The premiere was was focused on the political theme of the early 1970s.

There was a revolution in all directions during 1972- music, science, civil rights, and politics.

Cass Elliot was part of that revolution, as well as John Denver.  She used the Midnight Special’s premiere as a platform to bring remind young voters that their voice and action was just as important as anyone else’s. She urged the youth of 1972 to vote, utilizing the newly eradicated 26th amendment- which had just lowered the voting age from 21 to 18.  Elliot was the perfect voice to reach the young population of America- she was hip and confident… and a rock star.

“There is still in this country, believe it or not, after all the talk- a tremendous amount of apathy on the part of people who maybe don’t like the way things are going and you maybe want to change it but don’t do anything about it... I don’t think it’s so important who you vote for, who you believe in, but the important thing is to vote because it’s our way and it’s the best way and that’s why I’m here and that’s why you’re here too,” Cass Elliot declared to the audience and fellow musician John Denver.

The duo sang John Denver’s “Leaving On A Jet Plane.”  His manager had previously passed it along to Peter, Paul, and Mary, to which John had felt a little remorse over. In the end, the song was the peaceful mood changer that was intensely needed during the show. Both singers harmonize with masterful timing, delivering a calming wave of tranquility.

John had stated that “Leaving On A Jet Plane was about,“This is a very personal and very special song for me. It doesn’t conjure up Boeing 707s or 747s for me as much as it does the simple scenes of leaving. Bags packed and standing by the front door, taxi pulling up in the early morning hours, the sound of a door closing behind you, and the thought of leaving someone that you care for very much.”

The audience was visibly honored by the performance. Without the use of cellphones or modern gadgets, everyone’s focus was on the music.They didn’t miss a beat! When Cass Elliot and John Denver finished singing, they were awarded graciously with proud whistles and applause. They don’t make ’em like Cass and John anymore!