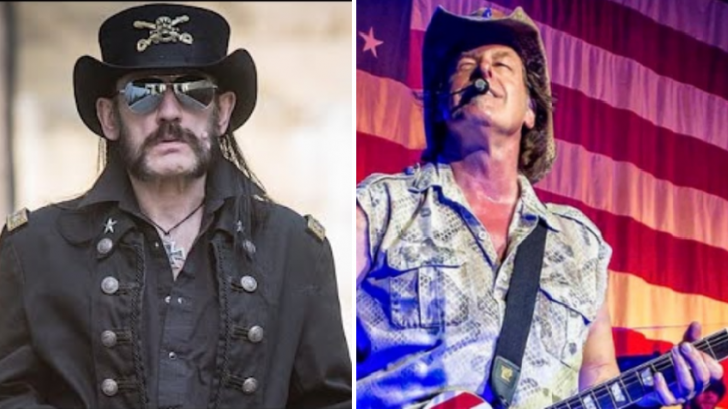 The unlikely encounter between Lemmy Kilmister (Motörhead) and Ted Nugent transpired in 1997 when the legends contributed to a re-recording of Queen’s “Tie Your Mother Down”.

The version came out on the Freddie Mercury and Brian May band tribute album entitled “Dragon Attack – A tribute to Queen”.

The track featured Lemmy on vocals and bass guitar, Uncle Ted on solo guitar, Rudy Sarzo on bass, and Tommy Aldridge on drums.

With “Tie Your Mother Down,” you have 4 titans who perfectly captured the spirit of the song and adapted it to their styles. Aldridge plays like hell and Lemmy, as always, doesn’t wrinkle.

In 1996 the metal world paid tribute to Queen, that emblematic band in rock history, a source of inspiration and reference for many musicians and many bands. Members of MSG, Impellitteri, Kiss, Dream Theater, The Doors, Motorhead, Ted Nugent, Yngwie Malmsteen, Anthrax, Deep Purple, Whitesnake, Fates Warning, Megadeth (the promotional sticker on the CD with Featuring members… Megadeth is very epic) etc …, they participated in this project that is possibly the best album of versions of the English band.

Good album Tribute To Queen, maybe a bit wrong in the choice of voices, let’s rescue only Jeff Scott Soto and Robin McAuley. Established stars such as guitar virtuosos like Yngwie Malmsteen (great version of Keep Yourself Alive), Chris Impellitteri (same with I Want It All), John Petrucci (in Sheer Heart Attack), Bruce Kulick in Save Me (along with Jeff Scott Soto the best of the album) and Ted Nugent (in Tie Your Mother Down). We also have Matt Sorum from GNR, Lenny from Motorhead, and the entire Anthrax. The original songs will always be better but these versions are, in short, a remarkable effort by great musicians (the choice of guitarists is excellent in conjunction with the voices) with more than good results. The best tribute to Queen, hands down.

Keep going for the Lemmy And Ted Nugent collaboration below: