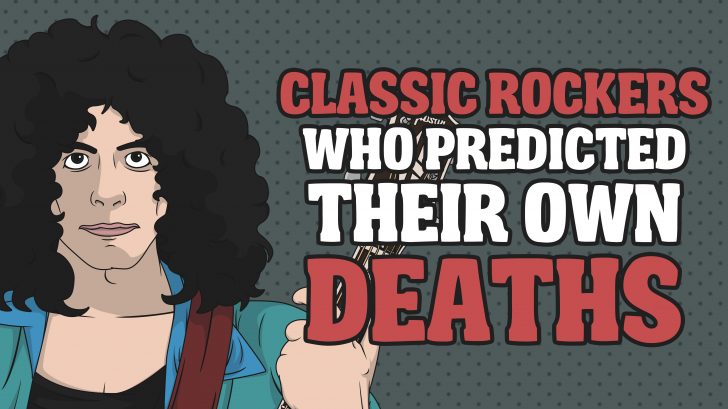 All Sorts Of Creepy

More than writing about drugs, sex and maybe life, these rockers also happened to have predicted their own ends. It’s both baffling and terrifying. Just thinking about what was going on in their heads at the time gives us the chills. Is it nothing more than mere coincidence? Or is this some sort of ‘fate’? You’re about to find out.

Two years before he released his debut album, Jimi Hendrix recorded “The Ballad of Jimi” which was “…a song dedicated to the memory of my best friend. His name was Jimi.” He also sings, “Many things he would try / For he knew soon he’d die… Five years, this he said. / He’s not gone, he’s just dead.” And yes, five years after recording this, he died.

“Life is the same / And it always will be / Easy as picking foxes from a tree” may have seemed innocent enough but the creepy thing is that five years after the song’s release, Marc Bolan died after his car with the license plate FOX 661L crashed into a tree.

“Borrowed Time” may be inspired by his sailing holiday but after his death, the song took on a different meaning especially with the lines: “Living on borrowed time / Without a thought for tomorrow.”

Aside from the line “The smell of death surrounds you” on “That Smell,” Ronnie Van Zant also shared this about the song: “I had a creepy feeling things were going against us, so I thought I’d write a morbid song (as a warning).”

His death was initially ruled as suicide after the two stab wounds in his chest were identified as typical characteristics of suicide by self-infliction. Later, the cause of death was left open which also made homicide possible. Nevertheless, the lyrics in his track “Needle in the Hay” became much more eerie: “I can’t beat myself / And I don’t want to talk / I’m taking the cure so I can be quiet.”

After Janis Joplin’s death on October 1970 and Jimi Hendrix a month prior, Jim Morrison was with friends at the Barney’s Beanery in L.A. when he said, “You’re drinking with number three. That’s right, number three.” A few months later, he died a mysterious death.

In the lyrics for “Dream Brother,” “That dark angel he is shuffling in / Watching over them with his black feather wings unfurled… Dream asleep in the sand with the ocean washing over” seemingly foreshadowed his own death because he died after drowning in the Wolf River Harbor. However, it was still somehow mysterious because he was fully clothed, complete with boots, when he went ‘swimming.’