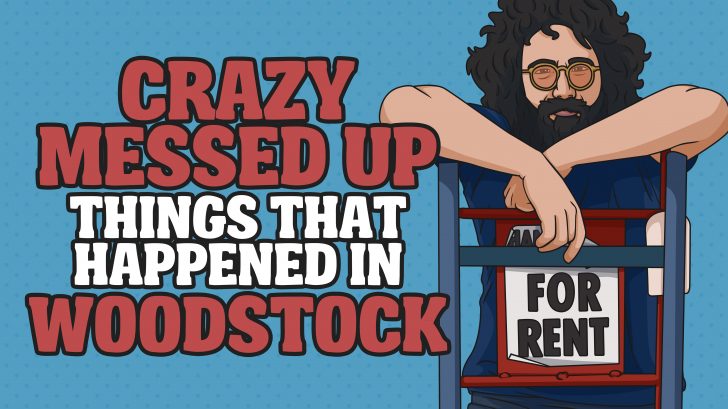 It Wasn’t All Rainbows and Unicorns

Woodstock ’69 was memorable in more ways than one. Every single hippie got to witness some of rock’s greatest artists perform, that’s a given. But the whole “experience” wasn’t without struggle. From disgusting bathroom setups to lack of food varieties, it’s kinda hard to imagine what the crowd went through just to be present in one of the most legendary music festivals of all time.

It wasn’t the most comfortable condition, that’s for sure. And so we’re listing down the messed up things that happened in Woodstock that most of us overlooked because of the sheer epicness of the performances.

Warning: Your stomach may turn so it’s best to put down whatever you’re eating or drinking.

Originally, tickets cost $18 for the three-day event. If you bought it at the gate, it would be $24. But the change of venue was already too late to set up everything again. So when the day came, those without tickets just walked through and soon it became a free-for-all festival. It would’ve left the organizers bankrupt if it weren’t for the documentary film which helped them cope up with their losses.

The organizers expected 200,000 people to show up. On the day of the festival, there was twice that number and so it’s not surprising that the festival-goers caused traffic for over 10 miles long. Some turned back but there were those who abandoned their cars and walked all the way to the venue. Residents found themselves unable to leave their houses because of vehicles blocking their driveways.

Nowadays, you can easily rent portable showers and toilets with the click of a button. But back then, you had to line up for over an hour just to pee. Think about it, the ratio was 1 porta potty for every 830+ people. Oh and did we mention it doesn’t work well too because it’s overflowing with a mixture of sewage and mud? And there’s too much of both that it runs downhill to the throngs of people gathered. Imagine that the next time someone says Woodstock was the coolest.

There were so many psychedelics being passed around that even those who didn’t want to get high fell victims to hippies who gave out drinks laced with acid and other drugs. Even the organizers became extra careful with what they drank and ate.

It wasn’t the perfect setup not just for the festival-goers but for the performers as well. When The Who took the stage, it was easy to tell Pete Townshend was in a bad mood. Political and social activist Abbie Hoffman was sitting on the stage beside Michael Lang and if he hadn’t been taking LSD, he could’ve realized it wasn’t a great time to mess with Pete. Suddenly, Abbie went up to the mic while The Who’s in the middle of their set and started ranting about politics and laws. Pete wasn’t feeling accommodating so he went to Abbie and hit him with his guitar. Fortunately, Abbie didn’t return the favor and instead, disappeared from the stage.

With over 400,000 people in attendance, it was clearly very chaotic. And yet, some fans still thought it was cool to walk around barefoot. And according to the Journal of Emergency Medical Services, the medical team had to treat 938 foot lacerations, 135 foot punctures and 346 other foot-related injuries. This is on top of other cases like asthma attacks.

Woodstock made legends. After the three-day event, several rock acts went on to become rock gods. Some live performances are still being revered up to this day. Sadly, that’s not the case for The Grateful Dead who are well-known for their epic shows and concerts. But to be fair, they’re not to be solely blamed. It was more like a series of unfortunate events for them. Their equipment somehow squashed the stage, there was flooding on the stage and because of the rain, they got electrical shocks from touching their guitars. And to top it all off, they were “smashed.” All of those things combined and well, you know it’s not going to be good.

With the number of people expected to attend, food vendors weren’t exactly thrilled to sign up for Woodstock. At Coachella, there’s a wide variety of stalls to cater to every craving – from tacos and burritos to smoothie bowls. But at Woodstock, choices were limited to…. *drum roll please* GRANOLA. The organizers ended up hiring a trio of inexperienced food vendors called Food for Love. Demand for hot dogs was so high they had to overcharge. But still, it wasn’t enough to feed 400,000 hippies. Hugh Romney and his group The Hog Farm Collective was initially hired as security but realizing that hunger could escalate to violence, they addressed food shortage by handing out granola in Dixie cups.