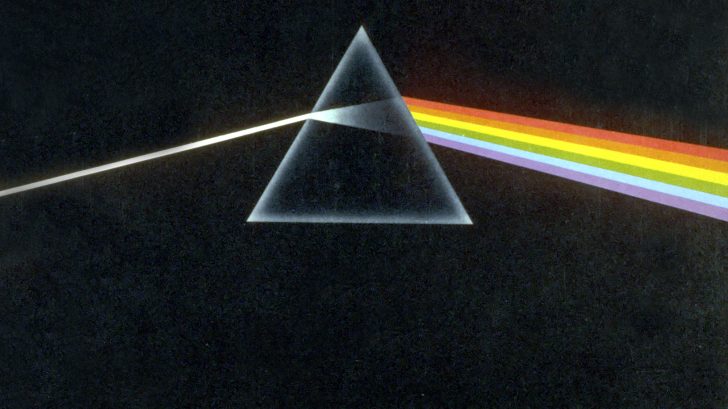 1973: Album cover of Pink Floyd's Dark Side Of The Moon released in 1973. Photo by Michael Ochs Archives/Getty Images

Dark Side Of The Moon is the record that deals with a universal theme. And there’s no single word to describe how this album is way-way better than the releases at the time, — you have to feel it, enjoy it, and listen to it wholeheartedly. The guitars, the vocals, and the saxophones are everything that makes this album such legendary. They did an incredibly good job with this one. Don’t believe me? Here we go, we’ll show you track-by-track…..

A song that opens up with a heartbeat that is slowly fading in, while there are two people conversing and the clocks ticking and some kind of cash register is chiming in the background. The first track in the album set to get you pumped up with its incredible sound effects and get you ready for the next song. This track really sets the entire mood of the album. It may be short, but it is a mood setter for the entire album.

With different guitar effects, using slides and effect pedals it makes it such a great song. It transcends you into another world, a very stony and trippy track that leads right up to the next track.

Pink Floyd was ahead of its time when they made this awesome track due to the way they used synthesizers. You would definitely hear numerous sound effects like footsteps running, a woman’s voice over an intercom, guitar screeching, and a lot more. Each one of them is awesome, especially the heartbeat as it started slowly and then it gets louder and louder until something crashed. I tell you, you have to listen to this one, it’s for you to experience it.

Pink Floyd is a TIMEless group, and this track can attest to it. Starting out with clocks ticking and then turning off all at once, slowly fading out then a heartbeat fades in, and the bass then starts while the drums imitate the ticking sounds. Everything in this track will deliver goosebumps all over your body, especially that David’s amazing vocals, and the guitar solo that kicks in.

“The Great Gig In The Sky”

All I can say with this track is “SHEER EMOTION.” Definitely one of the most emotional songs ever recorded in history. A must-listen track that will leave you breathless.

One of the most well-known Floyd songs and a lot of artists had covered this one. All that money ching-ching sound of a cash register and the coins dropping, this song perfectly describes an imperfect world.

The track that has a chorus that is probably the most intense part of the song, and of course, the saxophone solo in the midsection of the song. This song is an easy 5 over 5 rating.

Another trippy instrument song, the guitar effects are the best part of it.  All the guitar parts are nothing but short breathtaking. It’s all instrumental that leads right up to the second to last track.

The track that put Roger in the spotlight. He did the vocals with this one, and he did it pretty well! Overall, this is nothing but an epic song that really wraps it up for the entire message of the album.

The definite closing track for the album that gives an insight into how brilliant the Pink Floyd back in their day.

Overall, The Dark Side of the Moon is a legendary album! Listen to them all in the playlist provided below.