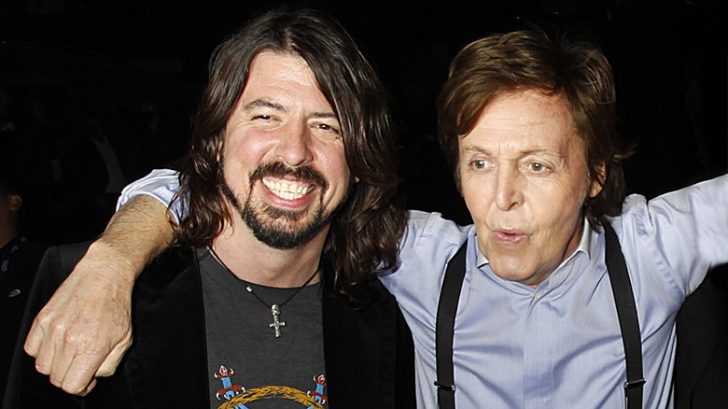 Thanks To Taylor Swift I Suppose

Dave Grohl, frontman of Foo Fighters told a funny story to James Corden on The Late Late Show with James Corden about the time “Shake It Off” singer “saved my ass” at a party thrown by Sir Paul McCartney.

They got on the subject of the Beatles living legend, who also appeared on Corden’s Carpool Karaoke segment, because of Grohl was inspired by Beatles songs to teach himself how to play the guitar.

During that fateful night, McCartney hosting the party got up to play one of his new songs on the piano. Then the crowd got hyped up calling out Grohl to play some tune. Here’s the problem with that: Grohl doesn’t have any idea how to play the piano, he “was a little out of sorts at that point,” and one major problem as well, all the guitars available around were left-handed exclusive only for Sir Macca. Grohl panicked, and thought, “Oh my god, what do I do, what do I do?”

Then a hero came to the rescue, Swift offered to perform a number.

“She saved my ass,” Grohl said. “She gets up and she starts playing this song and it sounds familiar and I’m kind of a little bit out of it and I’m looking at my wife like, ‘I know this song, what is this song?’ and she was playing the Foo Fighters song ‘Best of You.'”

Well, in order not to shed in embarrassment, he joined the pop star in a duet.

Dave Grohl has told the story before, but looking back at it is always fun, and in case some of you haven’t heard of it then keep going for the video below.