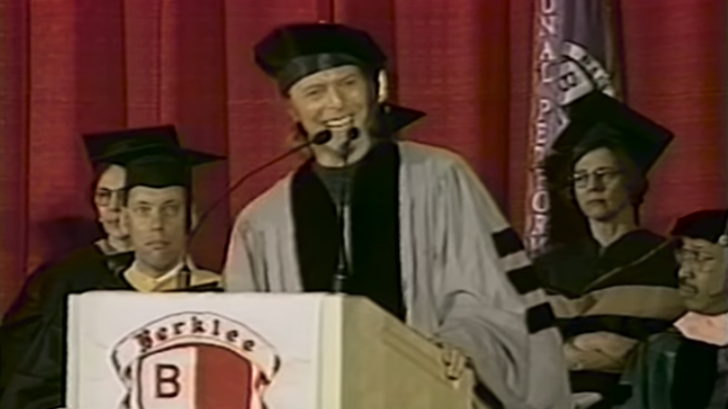 These Are Just A Few Moments From My Life

The British icon’s commencement speech in 1999 was beautifully eloquent and sincere. He had attended a concert at the college the night before and felt completely “moved” by the show, describing it as “dynamite.” David Bowie started the speech by repeating a joke an attending student had told him, “How does a tuba player answer the telephone? ‘Hello, Dominos?’.” The graduates laughed in unison as Bowie beamed with a smile.

The legendary musician had a very descriptive speech and seemed genuinely happy to be invited to Berklee College of Music’s Commencement Ceremony. Bowie explains that his best talent at the dawn of his career was playing the “what if” game. He contextualized that the game would be used to combine two different genres of music, and find out what it would sound like.

David Bowie talks about how he learned the saxophone, guitar, and piano to be able to translate his ideas into music and hand over the music to composers to polish the sound. He lists his inspirations: Coltrane, Edith Piaf, Velvet Underground, Florence Foster Jenkins, Julie London, and Shirley Bassey (among a handful of others).

Bowie continues to talk about one of his favorite things about music- turning the knob on the volume way up at the end of the song to “hear the final note.” One of the best parts of the speech is his bit about John Lennon, “his greatest mentor.” He described the relationship as “Beavis and Butthead.”

David Bowie ends his speech with the most heartfelt send-off a musician can hear:

“I can’t say that life’s pains or more tragic episodes have been diminished because of it (music) but it’s allowed me so many moments of companionship when I’ve been lonely, and a sublime means of communication when I wanted to touch people. It’s been both my doorway of perception and the house that I live in. I only hope that it embraces you with the same lusty life force that it graciously offered me. Thank you very much and remember… if it itches, play it!”