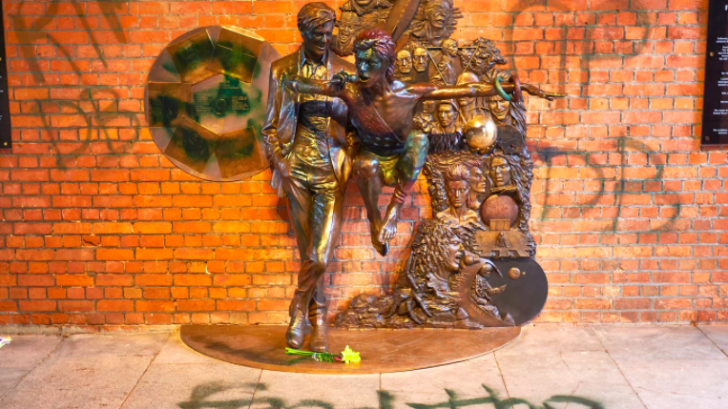 The statue of David Bowie in the county town of Aylesbury in Buckinghamshire, England was vandalized less than 48 hours after it was unveiled. Aylesbury was the county were Bowie himself debuted Ziggy Stardust and a bronze sculpture of him cost £100,000 raised through grants and crowdfunding appeal.

Many fans across the world were very dismayed by the vandalism around on and around the statue that read “feed the homeless first” and “RIP DB” written with black spray paint. An Aylesbury local fan argued,

“Vandalising it is awful. Tax payers will now be paying for the clean-up so it is the vandal who will ironically be taking money away from the homeless.”

Alex Laurent, the Samaritan Bowie superfan said that he will donte donate £5,000 to the homeless if the vandal who spray-painted the graffiti all over the revered sculpture will turn himself in. Laurent, who runs more than 100 David Bowie tribute groups in the UK, stated,

“Let’s see if they have the conviction to be convicted. I am saddened and embarrassed by my fellow Brits actions, but accept this could happen easily elsewhere in the world. Having worked for David Bowie for many years, I can say that he was not a person that would encourage a statue, but he was fiercely British and loved his country.’

24/7 security cameras are placed around the sculpture.