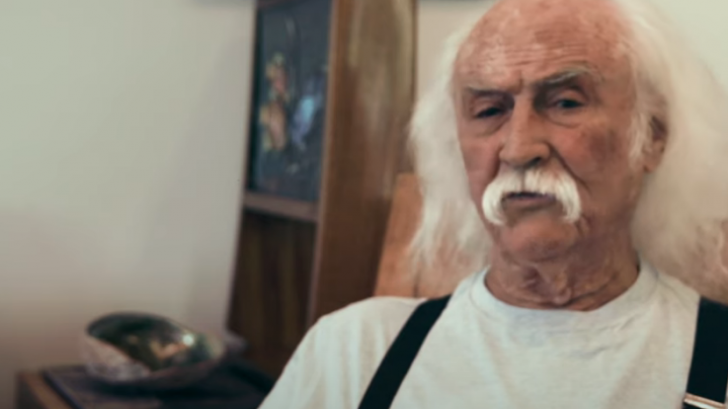 Crosby was a massive admirer of The Beatles and has frequently taken the time to explain his favorite pieces from their enormous and diversified repertoire. Over the years, he has expressed comparable affection for John Lennon and Paul McCartney’s music.

Crosby recounted hearing John Lennon’s “A Day in the Life” for the first time in a 2021 interview. “The best thing that ever happened to me was visiting The Beatles when they were making Sgt. Pepper,” he remarked. “I came in and I was very high. They sat me down on a stool in the middle of the studio and rolled up two six-foot-tall speakers on either side of me. Then, laughing, they climbed the stairs back to the control room and left me there. And then they played ‘A Day In The Life’. At the end of that last chord, my brains just ran out my nose onto the floor in a puddle. I didn’t know what to do, I was just stupefied.”

Recently, in honor of McCartney’s 80th birthday, Crosby paid tribute to the other half of the great songwriting collaboration. In a conversation with Stereogum, he discussed his undying devotion to Paul McCartney’s Revolver masterpiece, ‘Eleanor Rigby.’

“Nobody else wrote about those people,” Crosby opined. “Nobody else had the heart to write about the lonely, old, frozen-in-place people that are the main part of the population. Nobody writes about them. We write about glorious, brave, bigger-than-life. We write about people who are in terrible pain. We write about very dramatic things. But we don’t write about small, cold, old, painful, lonely stuff like that, man. It was a very brave piece of writing. It’s a kind song, it’s a song of compassion in a quiet and very beautiful way.”

He went on to elaborate on McCartney’s songwriting abilities: “A friend of mine, an English guy named Clem Floyd, brought the very first Beatles record home and said, ‘You won’t believe this’. We put it on and it absolutely freaking floored me. It was the first rock’ n’ roll that had that kind of feel to it. Paul just wrote differently than other people. He could write ‘Paperback Writer’ and stuff like that without even thinking about it. It was so different. Everybody else was trying to write about some girl’s tits or some bright, shiny experience that they had. This was dark and mysterious but kind. I just didn’t think anybody else was doing that. I didn’t think anybody else had the balls to do that kind of stuff. I thought it was an immensely courageous piece of writing.”

Crosby then discussed how psychedelic substances influenced the group’s sense of creativity. “I was stunned, man. I didn’t know they could grow that fast. I didn’t realise what would happen when you gave guys like that acid and pot. They said, ‘Oh, well, look at this’. And they went crazy. They went beautifully fucking nuts. They expanded their world drastically the same way their consciousness had been expanded. They were my inspiration for consciousness expansion on a lot of levels, not just taking psychedelics. Becoming aware of human beings in a different way than I had been.”

Finally, he emphasized the mood diversity reflected in McCartney’s writing: “You know, if I’m driving on a sunny afternoon I want to hear ‘Day Tripper’. But if I want to be moved emotionally, man, ‘Eleanor Rigby’ really does it for me. I love ‘She’s Leaving Home’ also. I think that’s another very brave song from around the same time. Very emotionally mature, very grown-up, very beautiful. He dealt with very emotional stuff very bravely.”