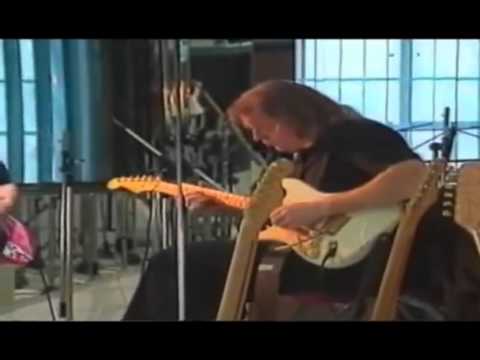 The genre of rock music includes packed of legendary guitars, like Jimmy Page’s double-necked Gibson SG, Jimi Hendrix’s white Fender Stratocaster, and Kurt Cobain’s Fender Jag-stang. David Gilmour is the owner of quite a number of them, having played lead guitar for one of the most well-known psychedelic bands of the 1960s and 1970s. Here, he recounts the history of his cherished Stratocaster #0001.

The guitar’s name is derived from the serial number “#0001” written on its back. Many have assumed that it was the very first Stratocaster produced by Fender due to this. Being produced in 1954, the first year, it was unquestionably among the first. However, George Gruhn, owner of Gruhn’s Guitars and a collector of antique guitars, is the owner of the first Stratocaster, which was produced with the serial number 0100.

In the late ’70s, David Gilmour acquired “0001” from one of Pink Floyd’s guitar technicians, Phil Taylor, who had acquired it a few years before from renowned guitar maker and musician Seymour Duncan. Phil paid $900 for the instrument but sold it to Gilmour for $600, which was an excellent deal. At the time, Gilmour was giving the guitar tech a loan so he could purchase a home. In a 1986 interview with Guitar Magazine, Gilmour recounted:

“Eventually, Phil wanted to borrow some money to buy a house, so I blackmailed him! I said the only way I’d lend him the money to buy the house, was if he sold me the white Strat…”

Because it is somewhat of a collectible, Gilmour hardly ever used #0001 for live performances. However, he did use it during a few recording sessions, particularly those for his 1978 self-titled debut album, which is when he was first noticed playing the guitar. Some have claimed that he used #0001 for a live promotional film in 1978, but in actuality, he used his trusty Black Stratocaster.

Gilmour later used #0001 to record his guitar line on “Another Brick In The Wall, Pt. 1” from Pink Floyd’s 1979 album The Wall. 2’. Unusually, the guitar was connected directly to the mixing console without the use of amplifiers or microphones. On the other hand, a Gibson Les Paul Goldtop was used to record the solo. The song “Glad To See You Here,” which is perhaps most known for using #0001, can be found on Wing’s 1979 album Back to the Egg. On Bryan Ferry’s “Is Your Love Strong Enough?” it also appears. He took it out once more in 1991 for a recording session with former Steely Dan guitarist Jeff Baxter. Its most recent performance occurred in 2004 when Gilmour took the stage at Fender’s Strat Pack event honoring the Stratocaster’s 50th birthday.