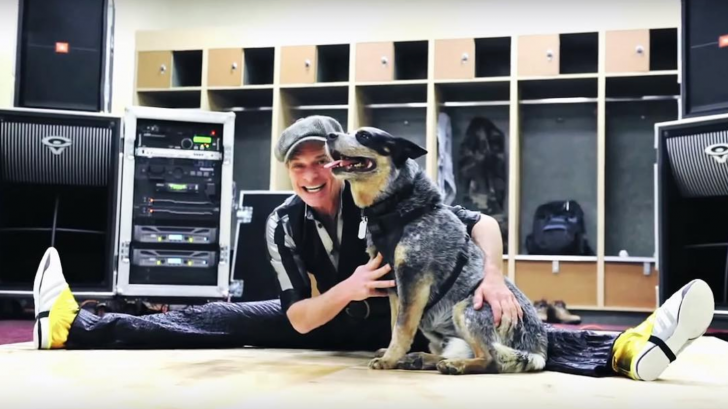 David Lee Roth explains his final moments with his 4 legged best friend, Russell, a cattle dog, who was 12 years old.

A new episode of The Roth Show is live, "Thanks for a Great Tour… Version 2.0." Listen to the full episode www.davidleeroth.net

As kids we knew nothing, later on we learned nothing, and soon after achieved nothing. My accountant says soon I'll have nothing. All this would've been impossible without football.. A new episode of The Roth Show is live, “Victory Field.” Listen to the full episode www.davidleeroth.net

What we did for Russ, he’s a cattle dog, 55 lbs, off road, all over the world dog, right, he’s a big tough dog, but couldn’t move, couldn’t even roll himself over. Instead of just tearing your heart out, my sister made plans ahead and went to Pie n’ Burger. She got two of the biggest cheeseburgers they ever made and they made them at breakfast time because they knew it was an order in advanced. Got two orders of french fries, enough ketchup to float ’em. And two big vanilla milkshakes. No straws, they’re not for you, they’re for the dog!

And we brought them back and fed two cheeseburgers to Russ and his eyes rolled back in his head and his toes curled.

And we gave him milkshakes, we gave him two of them, and his eyes rolled back and we disappeared in his glorious memory of love. And he fell asleep and went to heaven, and I want you to take note because that’s how I want ME to go.

You Can Watch It Here: