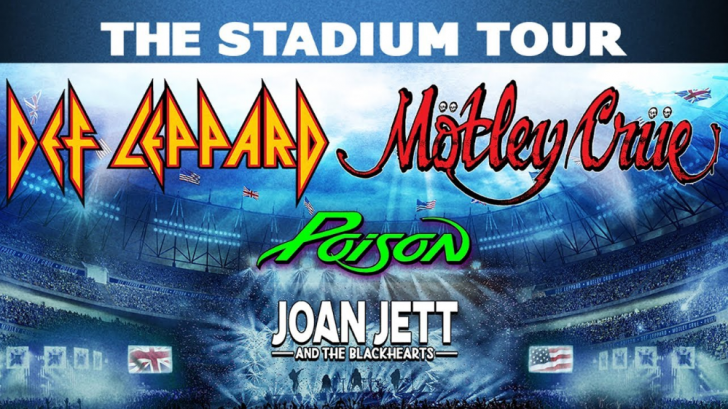 After postponing their summer Stadium Tour due to the global health crisis, the big four, Def Leppard, Mötley Crüe, Poison, and Joan Jett and the Blackhearts announced the rescheduled dates for 2021.

“All tickets will be honored for the new dates,” they wrote in a message to fans. “If you are a ticket holder and cannot make the new show, you will receive an e-mail from your ticket provider you can visit livenation.com/refund. We look forward to seeing you in 2021!”

During a recent interview with the radio station 95.5 KLOS, Motley Crüe drummer Tommy Lee spoke about the band’s plans for the tour. “Nikki [Sixx] and I had spent — Jesus! — several months designing the Stadium Tour, he said. “So all that stuff is sitting in a ginormous warehouse. And the only I can tell you is that it’s insane. You give us a ginormous place that seats between 40 and 60 thousand people with no roof on it, alls I can say is we had a blast designing this. It’s one of those where people are gonna walk out going, like, ‘What the hell just happened here?’”

Mötley Crüe have not toured since their Farewell Tour in 2015, and have swore that it would be their last tour, and even claimed to sign an alleged “Cessation of Touring” agreement that made it legally binding. But like Kiss, Ozzy Osbourne, Cher and many prior to them – they have broken their promise.

“We all get to the end game different ways,” Def Leppard frontman Joe Elliott told Rolling Stone in late 2019. “We got to ours by sticking together and pacing it a certain way. They got to their end game — if it is even the end — by going away and coming back with a big bang. We never had the benefit of a big bang because we never went away. Everybody has their own different story, but unless you go down in a plane crash, nothing is ever that final.”

Per Live Nation policy, fans who want to get a rebate for the show have 30 days to reclaim, with more info available at Live Nation’s refund page.