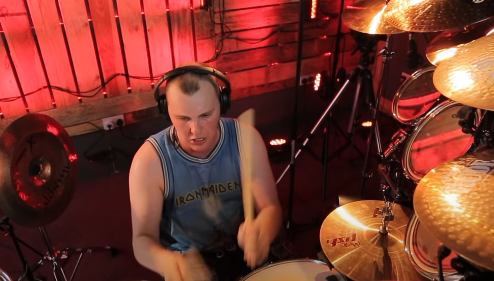 To stand out on the Internet you have to make a fool of yourself or something extraordinary like drummer David Winter who published a cover of Iron Maiden, played all 160 songs of the beast.

It’s Winter’s “Medley of the Beast.”

“This is my tribute and thank you to Iron Maiden and [their drummer] Nicko McBrain,” Winter said alongside the video from April 29, as Planet Rock reported. “This is the biggest, best and most important project I have ever put together.”

This wonderful musician released a 36-minute video titled “Beast Mix”, which consists of literally playing all the Iron Maiden songs from each of their albums. As if that were not enough, he does it in chronological order, starting with “Prowler”, the first track from his 1980 debut album, and ending with “Hell on Earth” the closing song ‘senjutsu’ their 2021 album. total, we are talking about 17 albums consisting of 160 songs, which are combined into one.

“I’ve had this idea in my head for more than seven years. I’ve pieced this medley together three times over. Without exaggeration, I have easily put at least 1,000 hours into this project.”

He revealed, however, that he “feared that someone would beat me to doing a project like this but … it seems no one in the world is quite as stupid as I am! If Nicko McBrain himself sees this video and gives it a ‘Not too shabby!’ then it will all have been worth it.”