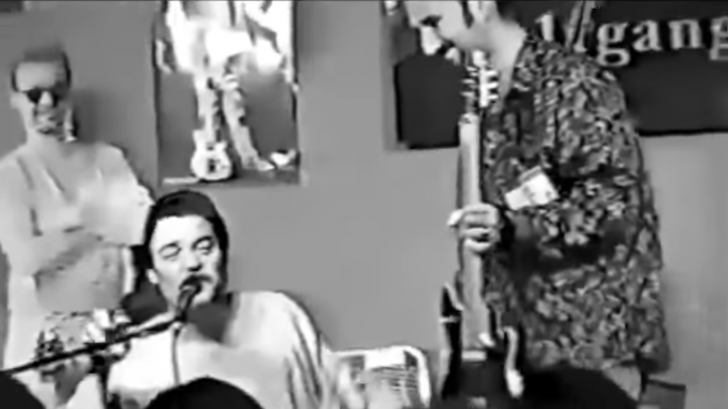 “Anyone wanna come up and play?”

First off, can we just say we miss these simpler times when great rockstars go to these small venues to entertain their fans? We rarely see this happen nowadays. And while we’re not sure what year this exactly happened, we’re quite certain Eddie Van Halen was already a household name at the time.

And so yes, he invited ANYONE to come up and play his guitar. Then this guy accepts the challenge and well, you gotta see him display his axeslinging chops! Oh and he even looks like a rockstar too. We won’t spoil it any more for you, you just have to watch what happens next.

This is the coolest thing we’ve seen today. What are the odds of calling someone on stage only to witness them shred it like it’s no big deal? You gotta love it when fans can hold their own. There’s nothing quite like performing in front of your hero and impressing the heck out of them.

Besides, Eddie Van Halen is one of the most revered shredders of all time – his mad axeslinging skills has been analyzed several times by experts.

“The first time I heard Eddie Van Halen, I was absolutely floored. I was also petrified. Here’s a guy who clearly understood very, very passionate lyrical lead playing. I didn’t know immediately that he was a fan of Eric Clapton—who is one of my biggest influences. But I guess that’s kind of why I responded to his playing, and it didn’t really matter if he was going to play very fast—which he could, and that was the intimidating part of his talent.” – Kiss guitarist Bruce Kulick

Just watch his reaction as his fan starts playing…