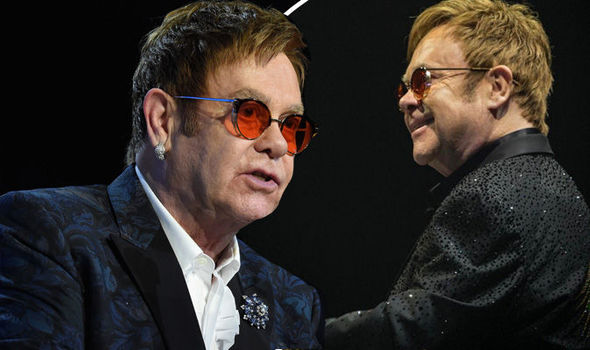 One Does Not Simply Hit A Legend In The Face!

Elton John was left staggered during his concert at Caesars Palace in Las Vegas last February 14. 2018 when he was smacked in the mouth by a beaded necklace.

The 70-year-old rocker was performing one of his classic songs “Saturday Night’s Alright for Fighting” when the beaded necklace was thrown across the top of this piano, directly hitting him in the mouth.

In the video of the incident, the legendary classic rock singer look stunned as he stopped his playing to check whether his teeth have any damage. He was kind of vexed and mouthing a curse word as he came to terms with what had occurred and took a tissue from the stage personnel, wiping his mouth with it to check if the chain of beads that hit him had drawn any blood.

After the incident that lasted for less than a minute, Elton Jonh continued with the performance, picking up the pace to join in with his band, who had kept playing throughout the fiasco.

According to TMZ, it may have been someone in the front row of the audience who threw the necklace, Elton had invited these front row audience to come on stage as he performed his classic song.

Elton John as an extraordinary live performer recently announced that his three-year “Farewell Yellow Brick Road Tour” will be his last. Tickets for the 60-date North American leg of the tour went on sale at the beginning of February and sold out almost immediately.

“I want to thank my extraordinary fans for their overwhelming support throughout my career and especially their interest in being there to celebrate my final Farewell Yellow Brick Road Tour,” Elton John shared in a statement. “We are working closely with AEG (promoters) to make sure more cities and additional concerts in sold-out markets are added in North America wherever and whenever possible.”

“I am so excited for the start of the tour and can’t wait to see everybody on the road.”

The tour will get going in Pennsylvania in September, and consist of more than 300 shows across five continents.

Check the video of the incident below: