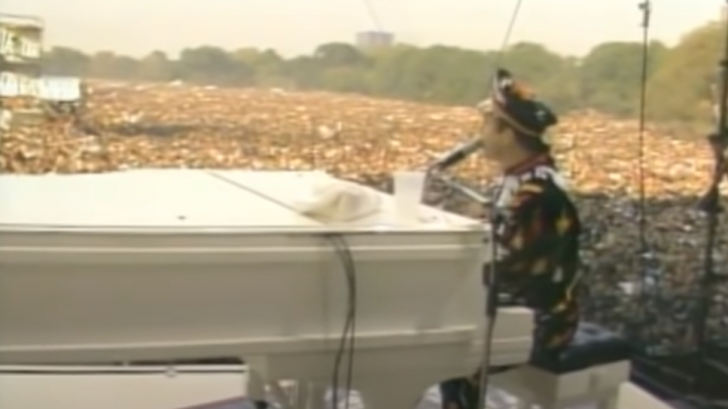 John Lennon and Elton John were, in addition to two great and revolutionary musicians, quite friends. The artists shared a musical and personal connection that still survives in Elton John’s memory today.

The icons formed a great bond when they met in 1973, the year in which they embarked on an unprecedented friendship. However, this was cut short when Lennon was tragically murdered in December 1980, in cold blood outside his New York apartment and at the hands of fanatic Mark David Chapman.

Since 1975, John Lennon was practically reclusive and as of August 1980, he was recording the music tracks that would make up the Double Fantasy album. On September 13, Elton participates in a free concert in Central Park, New York, attracting more than 300,000 people. This show is famous for showing Elton dressed as Donald Duck singing ‘Your Song’ and paying tribute to John Lennon singing ‘Imagine’. Elton John announced in the late afternoon: “We are going to make a song composed by a friend of mine that I haven’t seen in a long time. He lives right there across the street ”.

Elton performed “Imagine” throughout his 1980 tour, but the most important one was after December 8th when Lennon was killed by a mad fan right in front of his Dakota apartment. John hasn’t done the number since that terrible month. It was just too painful for him to perform, though in 1981 he did work on “Empty Garden” as a tribute to his late comrade.