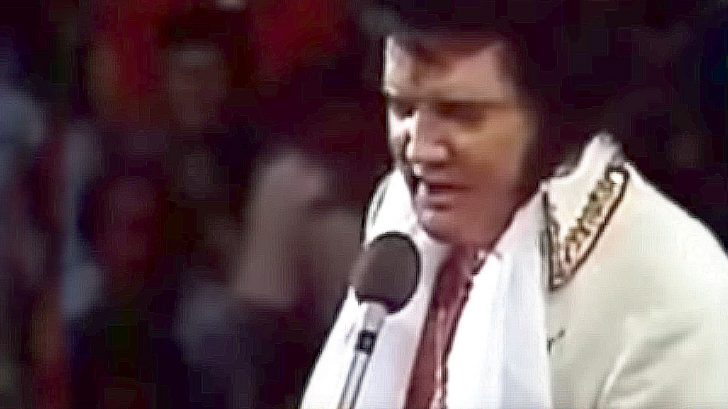 A little under two months before a heart attack claimed his life at the age of 42, Elvis Presley gave the last performance of his life – a 20-song romp through a career that spanned more than twenty years in length, much to the delight of the crowd of 18,000 strong that turned out to see him for what would be the last time. Kicking things off to the tune of “Also Spake Zarathustra,” the rest of the evening was business as usual for Elvis and his band; introductions, joking with the audience in between songs, a few solos thrown in for good measure, it was a good time had by all when suddenly, before anyone knew it, it was time for the last song: “Can’t Help Falling In Love” from Presley’s 1961 film, Blue Hawaii.

Fun Fact: A vast number of recordings have been issued under Presley’s name. The total number of his original master recordings has been variously calculated as 665 and 711.

An emotionally charged final few moments with the King, “Can’t Help Falling In Love” finds Elvis and his fans together one last time, the joy that brought them together two decades earlier still apparent in the smile on Elvis’ face and the air of hysteria in the audience as present as it ever was.

No one could have known that this was the last time they’d hear “Can’t Help Falling In Love” straight from the King’s lips, and that alone makes it hard to tear your eyes away for even a moment – but we’re so very, very glad that this moment was caught on film, keeping the magic alive for just a little while longer. Still, it doesn’t take away the fact that it’s heartbreaking especially if you know it won’t be long before he leaves this world.