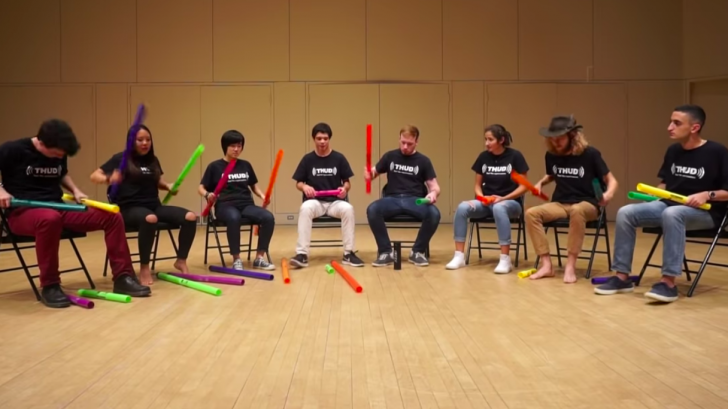 What in the heck even is a  boomwhacker anyways? Well, it’s a stick which, when whacked, plays a musical note – as simple as that. But, as you can imagine, to be able to make music, lots of boomwhackers are needed meaning it requires many hands to make a song.

And those many capable talented hands came in the form of The Harvard Undergraduate Drummers (THUD) who have mastered how to make music out of the boomwhacker. They boomwhacked their way to classic rock perfection with teamwork, synchronization, and the musical ability of whacking an elongated plastic item. The results are glorious song covers.

The ivy league percussion troupe of undergrad students have already garnered millions of views in their YouTube videos which has truly established them as a viral sensation.

It looks simple, easy, and sometimes funny, but coming up with an impressive cover using the boomwhackers is actually a tedious task. THUD does everything from editing sheet music, modifying songs to suit their instrument, color coding each note that corresponds to a boomwhacker and assigning a boomwhacker to each bandmember.

“This can be a lengthy process but it’s important to make sure no one part is impossibly complex,” THUD director and student Dody Eid told the Press Association. “The goal is to have parts make as much sense as possible to the individual person playing his or her notes.

“Sometimes this goes well, other times not so much. It’s a learning process and we are still figuring out the best way to systematize it.”

THUD’s repertoire includes songs by Journey, The Beatles, even the James Bond theme. Their hardest challenge however? It’s a videogame theme song.

“I’d say the hardest one to put together to date has been the Mario theme,” said assistant director Yasmin Luthra. “Although the piece is short, it involved a lot of coordination on our part to be both rhythmically precise and musical.

“This was mostly because the Mario theme had very few notes repeated in a row, unlike many other songs we play on Boomwhackers, meaning a different person was playing after almost every note.