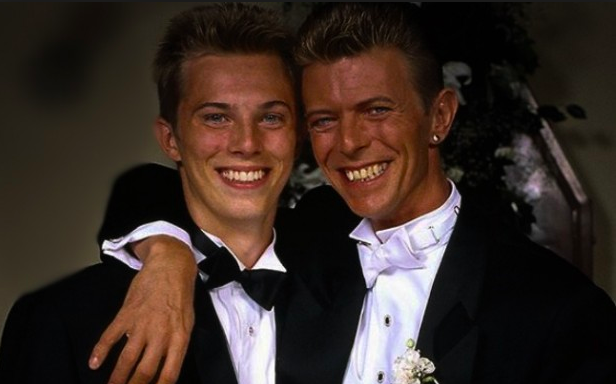 When he was younger, Duncan Jones was known as “Zowie” Bowie until his teen years and was living the life of a rock star’s child.

He’s the son of the Thin White Duke and his ex-wife model Angela Barnett (they divorced in 1980). She agreed to give up give up custody of their son and was awarded $750,000 in the settlement.

She and Duncan haven’t spoken in more than 30 years. Duncan told the Daily Mail in 2011,

Family drama aside, Duncan was raised in a creative household and he said that his rockstar dad tried to get him to learn music but he refused. He tells,

“He tried to get me to learn the drums, but I didn’t want to. The saxophone? No. Piano? No. Guitar — no thanks! Bless him. He kept on trying and nothing was happening. Nothing would take. I don’t know if subconsciously there was some reaction going on; if there was something in me that didn’t want to learn an instrument — because I couldn’t have been that incompetent! He’d say, ‘You have to practice…’ and I was like, ‘But I don’t want to practice….’ It didn’t interest me, so it wasn’t going to happen.”

Thankfully, like a good dad, Bowie did not force him any further and instead introduced his son to other creative outlets that eventually led to Jones’ career as a film director. It was Bowie who gave him his first 8mm camera and got him into photography.

His debut film, Moon, had much critical acclaim received prestigious awards. He said in an interview with  Wired that Moon was conceived as a throwback to the science fiction movies of the ’70s and ’80s, a time when he was being raised by his famous dad, living one of the most unconventional childhoods you could possibly imagine.

Duncan Jones is married to his Filipino-American wife, photographer Rodene Ronquillo, who was diagnosed with breast cancer at the age of 32. They got married the same day she got her diagnosis.

Jones tweeted, “We were a little overwhelmed by the news: cancer & Election Day, so we decided to make it a set, ran down to the courthouse & got married.” Jones shared a photo on Twitter of his newly-shaved head in support of his bride.

In 2013, Ronquillo announced that she’d undergone a double mastectomy and kicked the cancer.

The couple has a son named Stenton David Jones and recently welcomed their second child, a baby girl named Zowie Tala Jones, in April 2018. Both children were named after their late grandfather, David Bowie.