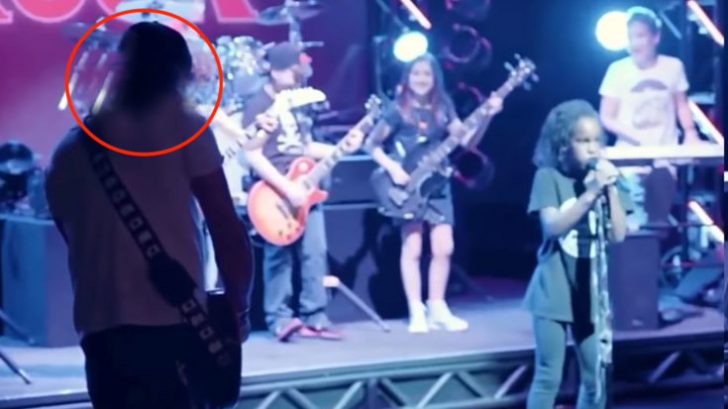 Some of them may not have fully appreciated what happened yet but in a few years, they will realize that they just earned a lifetime of bragging rights. Because really now, who would have thought Slash would show up during their performance and play with them?

Also, we definitely like the fact that he didn’t try to steal the spotlight especially from that singer whose vocal performance is hands down stellar.

“It was really cool to meet such an enthusiastic and talented bunch of young rock ‘n’ rollers. They were great kids as well as players.” – Slash

Despite his rockstar status, he didn’t choose a grand entrance but instead, he quietly walked onto the stage and the look of surprise on the kids’ faces, that was just priceless. Love him or hate him, Slash is one of the coolest dudes in rock (maybe next to Steven Tyler).

Oh and can we just add, these kid rockers are definitely going places! They already have that little rockstar aura. And even in the presence of Slash, they could hold their own. They’re also oozing with confidence and it shows in their performance – they’re playing like it’s nobody’s business and we’re totally digging that.

“You have to find ideas that turn yourself on, because no one out there is putting stuff out that turns you on like when you first started. Or anywhere close. It makes you work really hard — you’re still sort of kicking your own ass to do something good.” – Slash

Imagine if this happened to you, though. When you’re jamming with your friends and suddenly, an iconic rocker shows up and performs with you. We’d probably feel flustered but these kids handled it like a pro – they just kept on playing like it’s no big deal. That’s what talent looks like!