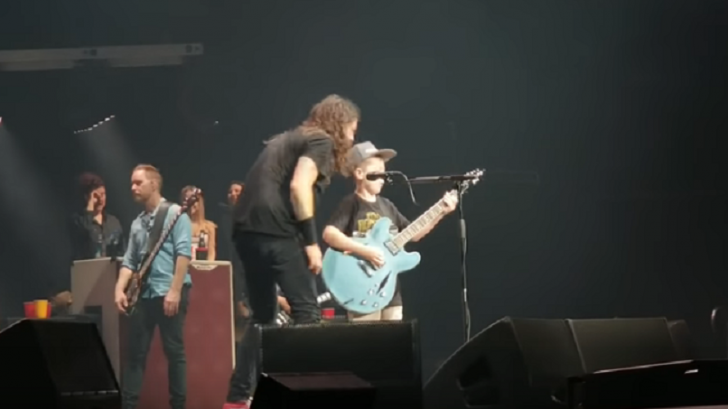 If you go to a Foo Fighters show, you’re always guaranteed to have a grand time. Case in point: during their concert on October 12 at the Sprint Center in Kansas City, a 10-year old stole the spotlight. Dave Grohl called up Collier Cash Rule on stage when the rocker found out the kid played the guitar. When asked what songs he knew, Rule answered: “I know a lot of Metallica songs.”

Dave being Dave responded, “Do I know a lot of Metallica songs?” Someone handed Rule a guitar and when he started playing the riffs to “Enter Sandman”, the crowd just went wild. The fifth grader also played “Welcome Home (Sanitarium)” and “Wherever I May Roam.” And to make everything more memorable, Grohl gave the kid the guitar he used. He even joked, “If I see that shit on eBay next week, I’m gonna find you, Collier.”

“Lookout world…Next generation of rockers coming soon to an arena near you! Thanks Collier! – Dave”

lookout world. Next generation of rockers coming soon to an arena near you! Thanks Collier! . #Repost @colliercashguitar ・・・ That’s me up there. Can’t believe I got to do this. @foofighters #davegrohl thank you so much for everything. I am working hard everyday on the guitar and bass. I played your guitar until my mom made me go to bed at 3am. @metallica @papa_het_ @kirkhammett @larsulrich @robtrujillo hope I made you guys proud. I saw you in STL last year and my mom is taking me to Wichita next year to see you. I can slay seek and destroy. Wish I would have played that. @mike_inez_official will you show @jerrycantrell and tell him I listened. I made sure to keep it fun 🎸🤘🏻 @sprintcenter awesome!! Thank you to my awesome mom @jendlugolecki for taking me to all of these shows. #foofighters #davegrohl #taylorhawkins #patsmear #metallica #jameshetfield #papahet #larsulrich #kirkhammett #roberttrujillo #rocknroll #ididthat 🙌🏻🎸🤘🏻. See the whole thing on my mom’s Facebook – Jennifer Dlugolecki- it’s 5 minutes 🤘🏻🤘🏻 https://www.facebook.com/1146396020/posts/10212933496589271/

Even Metallica tweeted a response to the now-viral video.

Collier Cash Rule is officially the coolest young rocker today. Not only did he get to play with a legendary rock ‘n roll band but he was also complimented by one of his heroes. Besides, he got to show off his mad guitar skills too. According to his mom, he’s been playing the guitar for two years now and he practices after getting home from school. Looks like all that dedication, focus and discipline paid off!

On the same night, Ed Sheeran was also playing in the area and Grohl who joked: “He ain’t got nothing on Collier.” LOL!