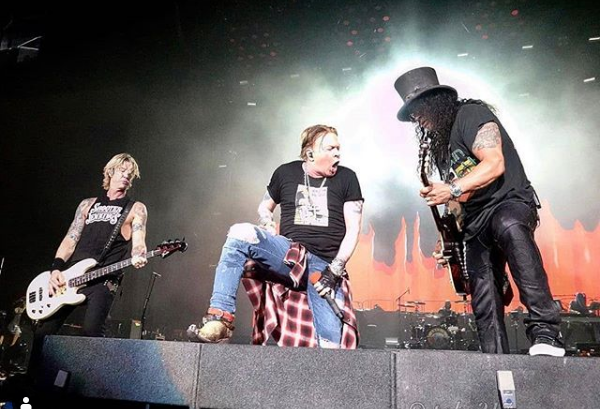 Matt Sorum was part of the group The Cult during several occasions, being one of his most remembered times with this formation corresponding to the album Sonic Temple; Later, he joined Guns N ‘Roses, replacing Steven Adler, when he was expelled from the band for his strong addiction to heroin in the early 1990s.

Slash was the one who noticed him during a The Cult concert he attended. Sorum debuted with Guns N ‘Roses on the Use Your Illusion I and Use Your Illusion II recordings; By the time he joined the group, songs such as “Civil War” or “Don’t Cry” had already been composed, since even Steven Adler performed “Civil War” in his last performance with the band.

He also participated in The Spaghetti Incident, until he was kicked out of the band in 1997 because of his quarrel with Axl Rose. It was nine years after when they decided to rebuild their friendship.

Recently, Sorum shared his experiences with Guns N’ Roses. He talked a lot about Axl Rose being late during live performances. Matt said he became frustrated when the band was late to start the performance that made the fans angry as well. But the silver lining according to Soum, it had helped the audience to enjoy the concert.

Here is what he told Billboard:

“When I talk about being backstage, and we’re two hours late, and I’m frustrated, once we got up there, it was just all-out rock n roll. We were just throwing down because there was a lot of frustration, anger, anxiety but it brought the show to a whole other level. The crowd was fired up because they were angry that we were late. But once we got out there, some nights were just absolutely on fire. I take great pride in that period in my life. It’s just a great gift that I was there at that time with that particular lineup.”

Axl Rose being late could have ended their career, but it did not, despite the drummer being angry at the time at Axl, he did saw the good parts and the memories he had and stated that he was lucky to be a part of that lineup.