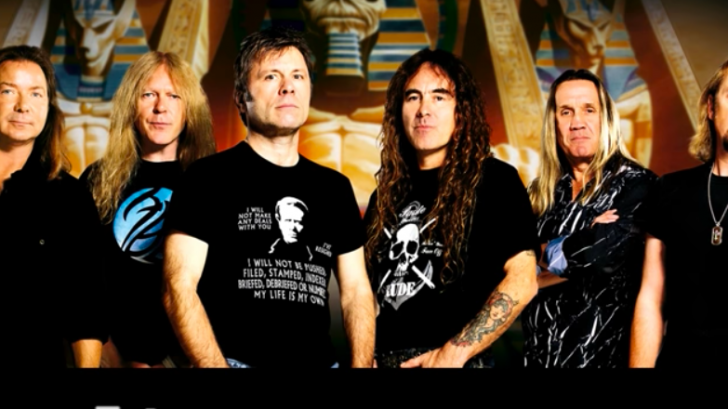 Though Paul Mario Day, Dave Sullivan and Terry Rance are not exactly the names you associate with Iron Maiden, not many may now that these guys were three of the band’s very first members. They were part of Iron Maiden’s original debut line up!

We all know that Steve Harris is the founder of Iron Maiden and it’s amazing how he was able to take a photo with Day, Sullivan, and Rance, making for a reunion of four-fifths of Iron Maiden’s original debut lineup. Too bad they weren’t complete that day and they were only missing original drummer Ron “Rebel” Matthews, who was absent during this reunion.

On Christmas day of 1975, Steve Harris formed Iron Maiden after he had just exited another band called Smiler, in a desire to express himself more as a songwriter. Drummer Ron Matthews was the first one to get an invite to this new band Harris was forming.

Paul Mario Day sang the vocals while Dave Sullivan played the guitar for the first year of Iron Maiden’s existence, however, the two did not make the cut by the end of 1976. Day was ‘let go’ because he lacked stage presence, as explained by Harris. In 1976, the group temporarily disbanded until they reformed with Dave Murray who played guitar in place of Sullivan. Murray would then become the longest-tenured member of Iron Maiden, next to Harris, of course.

Here’s a fun trivia about these original guys. Eddie’s Bar in Portugal was originally managed by Iron Maiden’s former roadie Manu Da Silva, and Rance and Sullivan both helped in its operations. After Da Silva’s passing in 2005, the bar closed but was reopened in 2006 with Rance and Sullivan supervising the operations. In 2009, however, it was Harris who closed the bar permanently.