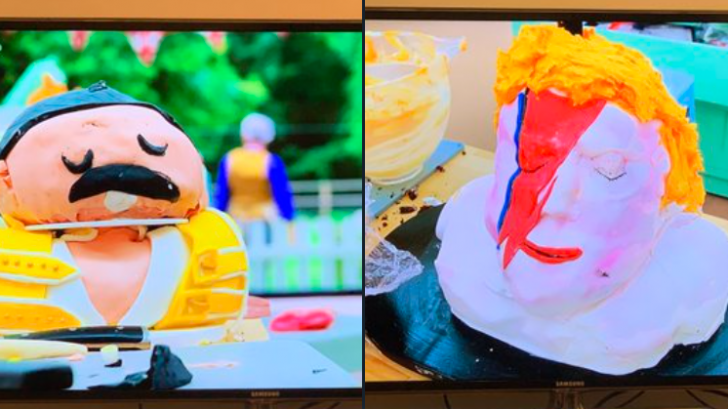 The Great British Bake Off is one of the UK’s most famous cooking shows. In the show, a group of amateur pastry chefs competes to make the best cake in the country.

The latest edition, however, featured a special challenge that consisted of portraying characters admired by chefs. Characters such as Queen Marie Antoinette or the British scientist David Attenborough were captured on the cakes, but it was the rock stars who got the looks and the laughs.

Freddie Mercury, David Bowie and Blink-182 vocalist Tom DeLonge were the characters chosen by the most assiduous participants in the music. Nonetheless, the results were surreal, to say the least.

Pressure pushing down on me… #gbbo pic.twitter.com/tBVcoAbnEd

The cake appearances sparked a wave of memes and jokes on social media. In fact, DeLonge himself joked about his own cake: “When I was younger and needed the money, I did a few hundred adult films. This looks EXACTLY like me at the time,” wrote the singer on his Instagram account.

When I was younger, and needed the money, I did a few hundred adult films. This looks EXACTLY like me at the time. EXACTLY. #Cake