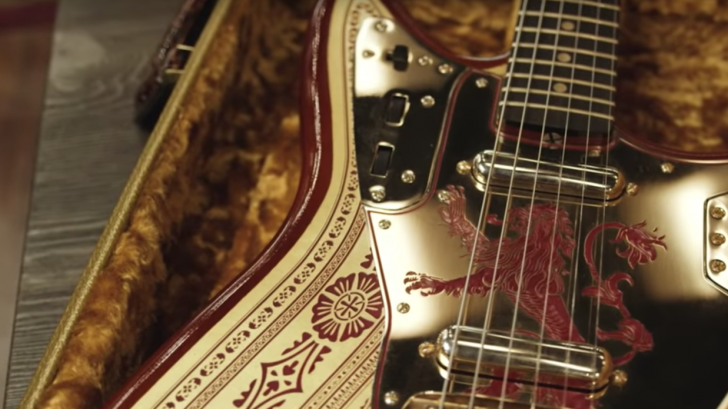 It’s here – the final season of Game of Thrones.

If you’re anything like me, then you’re looking for an extra special way to commemorate the show’s final season of killing damn near everyone on the television screen – and if, unlike me, you’ve got a cool 5 figures to spend recklessly, I’ve got just the thing for you.

Fender Guitars went above and beyond the call of duty, unveiling a brand new, limited series of Game of Thrones-themed guitars. Known as the Sigil Collection, the run consists of three electric six-string Fenders, all bearing intricate and ornate work hand-crafted by Fender Custom Shop Principal Master Builder Ron Thorn and made to represent the three main houses in Game of Thrones: the House Stark Telecaster, the House Lannister Jaguar, and the House Targaryen Stratocaster.

If that’s not impressive enough for you, wait til you hear what went into making these Game of Thrones-themed masterpieces, courtesy of our friends at Ultimate-Guitar.com:

“The House Stark Telecaster comes with a lightweight swamp ash body with inlaid sterling silver purfling, as well as an embossed Dire Wolf nickel silver pickguard. The Stark sigil was also inlaid in sterling silver at the first fret of the maple neck’s ebony fretboard. Also included in the mix are engraved knobs, an etched neckplate, and custom “Raven Black” and “Gray Wolf” finishes.

The House Lannister Jaguar utilizes a 24k gold leaf heraldic design on the alder body and headstock. The first fret inlay is brass, with gold hardware and a gold-plated pickguard embossed with the lion sigil.

Finally, the House Targaryen Stratocaster is carved with dragon scales across the front and back. A hand-tooled and stained leather pickguard features the three-headed dragon sigil, which is also inlaid in sterling silver at the first fret.”

But how do they sound?

So what’ll one of these guitars set you back? Oh, only a cool $25,000 at the minimum, $35,000 if you’re really wanting something special. Never fear, though – the fine folks at Fender got some special guests to test drive them for us mere mortals whose eyes twitched a little at the hefty price tag attached.

Can they play as gorgeously as they’ll look hanging on your wall for all to see? You bet they can – just ask Tom Morello, Extreme’s Nuno Bettencourt, and Scott Ian of Anthrax, who got the chance to jam the Game of Thrones theme song with co-creator and showrunner D.B. Weiss, and composer Ramin Djawadi!

Check it out in the video below!