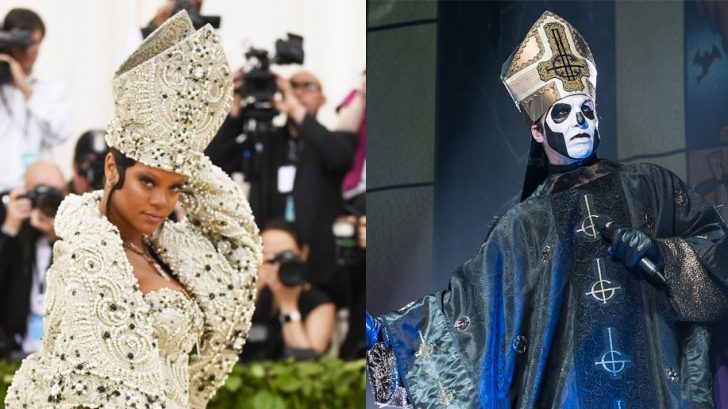 Who Wore It Best?

It has been awhile since the Heavy Metal group “Ghost” has immobilized their three Pope acts, “Papa Emeritus I, II, and III.” Now Rihanna has taken the step to imitate the musical group popular Papa Emeritus outfit. At this year’s Met Gala, the pop singer wore an outfit very similar to Ghost’s Papa, — just without the makeup.

Ghost, rather than taking it as an insult, “thanked” Rihanna for accidentally paying tribute to their Pope acts, saying “Imitation is the sincerest form of flattery.”

But despite all the ruckus, The New York Times describes Rihanna’s outfit as,

“She wore a white beaded Margiela corset mini dress under a full skirt, with a beaded bishop’s hat to match. The outfit was accessorized with a pearl anklet and a bejeweled crucifix necklace.”

Rihanna’s outfit surely did cost “a hellot of money,” though this kind of look has been going on since 2010 by three different Papa Emeritus, with a sense of badassery.

Check out the footage below of Rihanna in her Papal outfit posted by Ghost via Instagram.

[MESSAGE FROM THE CLERGY] We wish to inform you imitation is the sincerest form of flattery. Thank you, @badgalriri. #metgala2018 #metgala

The band also took the opportunity and asked it on Twitter who wore it best. — And of course, Papa Emeritus III won undisputedly.

[MESSAGE FROM THE CLERGY]

We wish to inform you that the clergy needs help in deciding who wore it best. #MetGala #MetGala2018 @rihanna @usweekly @people @voguemagazine @harpersbazaarus pic.twitter.com/c0TdKzzGmP