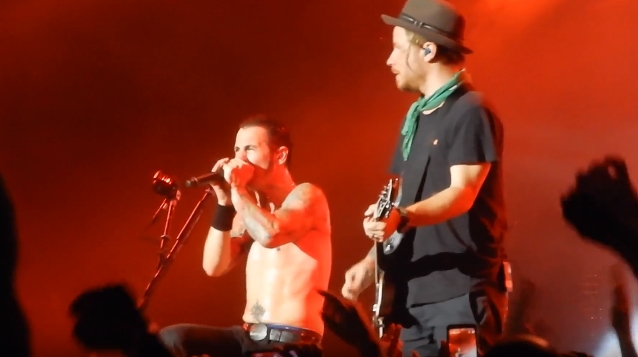 AC/DC’s musical impact on the world of rock music is undeniably awesome.  Godsmack is one of the living proof as they made an outstanding cover of “Highway To Hell” and Zach Myers Shinedown’s guitarist joined them onstage to perform the AC/DC classic.

The performance went down at Northwest Health at Jones Beach Theater in Wantagh, New York. Godsmack frontman Sully Erna perform the AC/DC classic perfectly even some of the higher-pitched turned to lower notes but still able to complement the tune, he ultimately delivered an incredible performance with so much enthusiasm as a lifelong rock fan of AC/DC. While Myers was able to deliver the same energy level as Angus Young would perform it.

As a lifelong fan, Erna ranked AC/DC’s Back in Black as one of the 10 albums that changed his life.

“This was a huge record for me,” he told. “They were loud, they were awesome, they were tight and they were basic… but they had really catchy songs. It was just a powerful record. Even the artwork was simple. There was nothing to it. It was just pure rock music.”

Godsmack and Shinedown will have a second North American leg of their co-headlining tour, starting September 21 in Greenville, South Carolina and running through October 11 in Portland, Oregon.