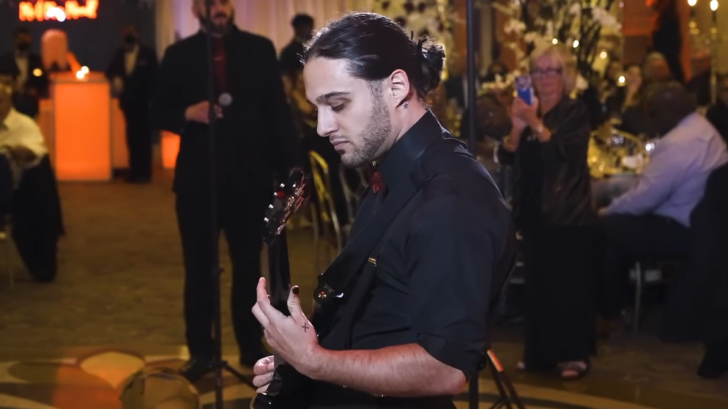 Speaking in public is not an easy task, and many artists have recognized that it is more difficult for them to tell their friends things in a meeting in a bar than to sing for full stadiums. This happened to John Morrell on his wedding day. As he had no words to express all his love for his fiancée, he decided to take out the guitar and start playing. Placing his wife on a throne in the middle of the dance floor, John began performing a piece of “Till We Rot” for Francesca, who couldn’t hold back her tears.

“I knew on the night of my wedding, I would have a hard time finding the right words to explain just how much Francesca Morell means to me… So I decided to write her a song instead… For my beautiful wife, I love you more then words can say,” Morell writes.

“A very special thank you to Yours Truly Media for capturing this amazing footage… & a HUGE thank you to my brotha Chad Erlitz at L.I. Nights Entertainment for diligently working with me to make this incredible moment come to life.”

John is a known musician on the Soundcloud music platform as SadSatan. That’s where he’s made a small name for himself in the music world by uploading experimental and industrial music.

He also performs some guitar works and covers of Lil Peep. The words became a spectacle creating an epic moment at his wedding since, in addition to the guitar solo he did for Francesca, he added a fog and pyrotechnics show that made the moment something unique.

The incredible moment took place at the end of last year and has filled people with the magical moment that John and Francesca experienced.