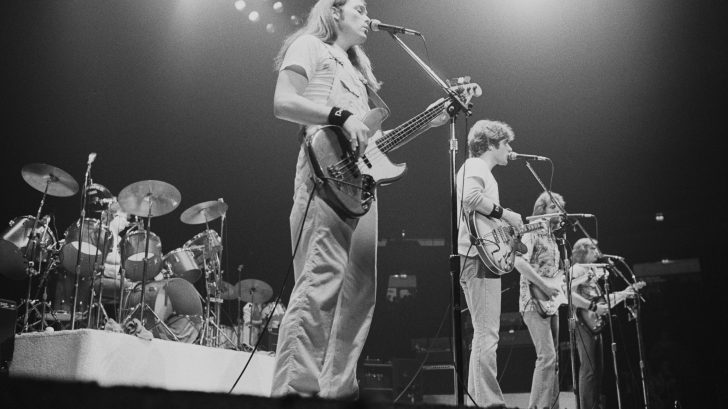 Owners of a unique and constantly evolving musical style, the Eagles were one of the most influential rock bands of the 20th century. Subsequently, they knew how to incorporate new sounds to captivate their most long-standing fans and attract new generations. Here’s a look at the band’s musical career behind legendary hits like Hotel California and Heartache Tonight, so sit back and enjoy the Eagles biography.

In 1971, Glenn Frey and Don Henley were playing for well-known American singer Linda Ronstadt’s band. During one of the tours, Frey suggested to Henley that they play together on a new project, and the pair of friends approached Ronstadt to let him know of their desire to leave the group. The singer put them in contact with Bernie Leadon and Randy Meisner, who accepted the proposal.

With Frey and Leadon on guitars, Henley on drums, and Meisner on bass, the quartet first performed in Colorado under the name Teen King and the Emergencies. The band stood out because, although Frey was the main voice, all the members of the group collaborated with their voices. The members chose the name Eagles after a trip to Arizona, due to a local tribe that worshiped eagles.

The band debuted with the album Eagles, released in 1972. In a short time, the album had become a success and the critics were quick to applaud the harmonic quality and high-level lyrics of the songs. The first promotional single from the album was Take It Easy, which had a great reception.

For their next album, the members invited Don Felder, a childhood friend of Bernie Leadon who had shared the stage with the band in performance. After recording a song, the Eagles asked him to join immediately. The album, entitled On the Border, came out in 1975, becoming a new success.

In 1975, the Eagles faced the departure of Bernie Leadon, who was unhappy with the direction the band was taking, preferring country music over rock and roll. Soon after, they released an album of their greatest hits, which became the best-selling album of the century in the United States.

With Joe Walsh as guitarist and the Eagles at the peak of stardom, the album Hotel California was released in 1976. The single that gave the name of the album was a resounding success, going down in history as one of the most emblematic songs of the 20th century. The enigmatic letter of the subject raised enormous controversy; some listeners pointed out that the song had satanic messages or that it incited cannibalism, which the band was quick to deny.

The next album, The Long Run, would take two years to complete and was released in 1979. Despite great reception from critics and fans, the Eagles announced their breakup soon after. The band argued that irreparable differences had arisen between the members.

The band members pursued solo careers throughout the 1980s, until they got back together in 1994, releasing the live album Hell Freezes Over. For the next few years, they toured all over the world. Later, in 2001, the group replaced Don Felder with Steuart Smith.

Note: After Felder’s departure, the guitarist sued the band, Glenn Frey, and Don Henley for not evenly dividing profits from promotional tours. The legal dispute prevented The Eagles from releasing records until the lawsuit was dropped when the parties settled in 2007.

Long Road Out of Eden, released in 2007, was the Eagles’ first studio album in almost 30 years. The album left fans extremely satisfied and, weeks after it went on sale, it went Platinum. The group spent the following years playing in different concerts throughout Europe and the United States.

The Eagles released a documentary entitled History of the Eagles in 2013. Although a promotional tour was scheduled, they were forced to cancel several dates, due to Glenn Frey having serious health problems. In January 2016, Frey died in New York from complications caused by arthritis and pneumonia. Although the band considered breaking up, they decided to tour again in 2017, with Deacon Frey taking his father’s place on guitar.