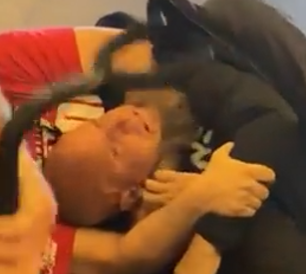 The Internet, as they say, is unbeatable. That is made very evident in the viral video below.

According to accounts, a robber was browsing in a local Guitar Center when he attempted to flee with an acoustic guitar. One of the store employees rushed him, attacked him, placed him in a choking hold, and told him he had to leave as soon as he was let go.

As he was pulled to the ground, the burglar battled to break free and even tried to smash the guitar by banging it against items.

It is crucial to stress, however, that this type of physical restraint should only be undertaken by skilled specialists until absolutely necessary. Furthermore, it is critical to adhere to local laws and regulations as well as corporate standards.

The man who was caught taking the guitar has not been named, but he is expected to face prosecution. It is unclear whether the employee will face disciplinary punishment as a result of his activities. Guitar Center has yet to issue a statement about the event.