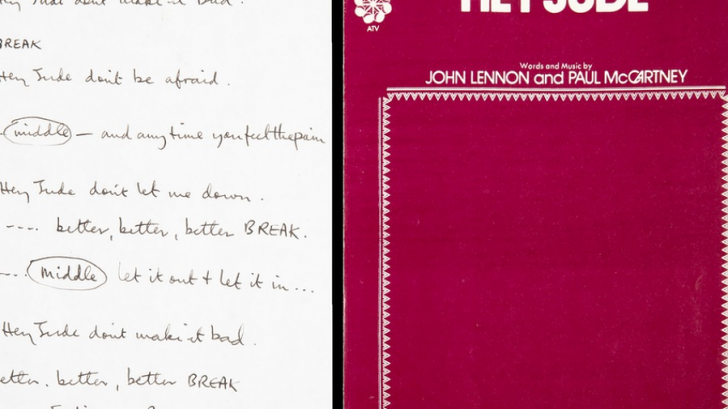 The handwritten Paul McCartney notes of “Hey Jude” made for the recording of the Beatles’ classic – sold for $910,000 at an auction last April 10.

The notes feature the opening line of each song’s four verses and two bridges, such as the word “break” after the first verse and “ending, fading” at the end. According to the description provided at Julien’s Auctions, McCartney used it at London’s Trident Studios and was given to one of the engineers after. Julien’s estimated the value of the piece of paper between $160,000 and $180,000, but it was sold for more than five times that figure.

The piece of paper was among the 218-item lot of Beatles memorabilia that Julien’s auctioned and sold in recognition of the 50th anniversary of their’ breakup. Other items were a bass drum head from a 1964 show at the Cow Palace in San Francisco for $200,000, a drawing made by John Lennon during his and Yoko Ono’s 1969 “Bed-In for Peace” for $93,750, and Lennon’s handwritten shooting notes for the promotional film for “Hello, Goodbye.”

According to NME, the auction was supposed to be held at the Hard Rock Cafe in New York’s Times Square, but moved for online auctioning due to the city’s lockdown because of the on-going global pandemic.